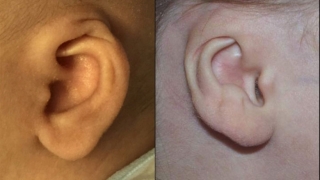 Examples of cryptotia Cryptotia refers to an ear cartilage framework that is partially buried beneath the skin on the side of the head. The upper portion of the ear is hidden, and there may be some malformations of the cartilage of the upper ear (the scapha and the superior and inferior folds of cartilage, or crura). This can make it difficult to wear glasses or masks.

It is unknown what causes cryptotia. It is more commonly seen among Asians. In Japan, it has been reported in as many as 1 in 500 births.

One treatment option for cryptotia is ear molding, a non-surgical treatment option that may help avoid the need for surgery. This treatment utilizes an external device that shapes and stretches the upper portion of the ear.

Unlike many other congenital ear deformities, which are most effectively treated in the first few weeks of life when the ears are soft and moldable, cryptotia may be effectively treated with ear molding well beyond the neonatal period. In some cases, successful non-operative correction of cryptotia has been reported even up to 5 years of age. This success may be possible because these ears already have a normal cartilage framework and primarily require skin expansion to cover the embedded cartilage.

Cryptotia can also be treated surgically. Surgical correction of cryptotia may require the use of local skin flaps or skin grafts to lift the ear framework from the side of the head. Severe cases may require a cartilage graft.

The goals of surgery are to:

Although a general anesthetic is needed, the operation is done on an outpatient basis and your child will be able to return home the same day.