What is deformational plagiocephaly

Deformational plagiocephaly refers to a flattened, misshapen or asymmetrical head caused by repeated pressure to the same area of the skull. Plagiocephaly literally means "oblique head" (from the Greek word "plagio" for oblique and "cephale" for head). 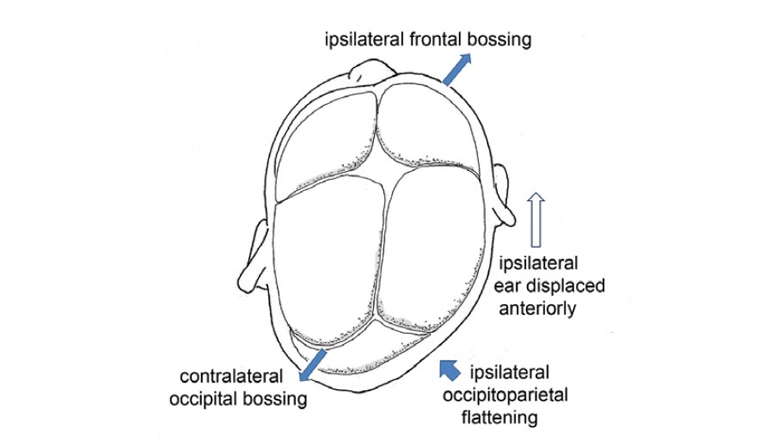 This illustration shows an interior view of the flattening caused by repeated pressure to the same area of the skull.

Deformational plagiocephaly may be present at birth and is thought to be due to an abnormal intrauterine position of the fetus. It is more common in multiple births when one fetus may be pushed into a compromised position that puts pressure on the same area of the head.

The condition may also occur after birth in a child who was otherwise born with a normal head shape. The sleep position instituted by the American Academy of Pediatrics in the early 1990’s to put children to sleep on their backs resulted in a significant increase of deformational plagiocephaly. If children tend to favor one side repeatedly when they are put to sleep on their backs, flattening can occur due to the repeated pressure on that one side of the skull. Some reports put this incidence between 20 and 40 percent.

Deformational plagiocephaly is very common, and can typically be diagnosed with a thorough physical evaluation by a clinician who specializes in treating craniofacial differences. Because the condition can be confused with craniosynostosis, especially unilateral lambdoid synostosis and unicoronal synostosis, accurate diagnosis by an experienced team is extremely important to managing your child’s condition.

Craniofacial experts will be able to differentiate readily between these conditions. In rare cases, your child’s medical team may use a CT scan to confirm the diagnosis and further evaluate your child’s condition. It is important that cases of craniosynostosis be identified early, as these conditions often require surgical treatment, and if left untreated, may result in elevated intracranial pressure.

In most babies with deformational plagiocephaly due to sleeping position, simple repositioning of the child to place them off the flattened area will resolve the problem.

If repositioning is not successful in addressing the problem, or if the deformation is moderate or severe and persists beyond six months, then helmet therapy may be required.

Helmet therapy works by fitting the skull tightly with a specially designed helmet in all areas except where it is flat. Leaving extra room around the flat area of the head allows the skull and brain to grow back into the normal shape that they were genetically programmed to do.

Deformational plagiocephaly can be associated with torticollis. Torticollis literally means “a tight neck” and can be seen when there are structural anomalies such as fused or hemivertebrae, or most commonly as a completely isolated anomaly.

In the majority of cases, physical therapy to straighten and stretch the neck will straighten the head and head posture. If your child has torticollis, he may habitually sleep in one position and develop plagiocephaly. Treating the torticollis will often help to improve the plagiocephaly as your child is able to sleep more comfortably in different positions. Otherwise, helmet therapy is used.

To date, no studies have shown that the flattened area of the skull leads to any compromise in neurocognitive function.

At CHOP, children with deformational plagiocephaly have access to the nation’s top pediatric specialists and coordinated care through our Craniofacial Program, one of the oldest, most experienced programs in the country dedicated to caring for children with craniofacial differences.

Watch: All About Craniofacial Conditions

Learn about the diagnosis and treatment of craniofacial conditions, including craniosynostosis, hemifacial microsomia, and other syndromes.

Why Choose the Craniofacial Program

CHOP’s Craniofacial Program is one of the Nation’s leading treatment programs for children with both congenital and acquired anomalies of the face and skull.