Intussusception is a life-threatening illness and occurs when a portion of the intestine folds like a telescope, with one segment slipping inside another segment. This causes an obstruction, preventing the passage of food that is being digested through the intestine.

If left untreated, it can cause serious damage to the intestines, intestinal infection, internal bleeding and a severe abdominal infection called peritonitis.

Intussusception is the most common cause of intestinal obstruction in children between the ages of three months and six years.

The cause of intussusception is not known, although viral infections may be responsible in some cases. It may be caused by an abnormality (such as a polyp) in the intestines or as a result of recent intestinal surgery.

In most children there is no abnormality present, and the cause is unknown. 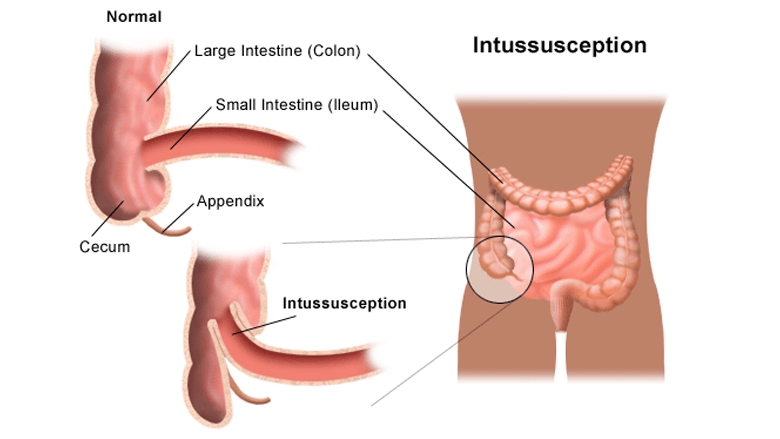 Sixty percent of those who develop intussusception are between 2 months and 1 year of age. Intussusception is rarely seen in newborn infants.

Although 80 percent of the children who develop the condition are less than 2 years old, intussusception can also occur in older children, teenagers and adults.

Intussusception and the rotavirus vaccine

Learn more about rotavirus vaccines and intussusception from the Vaccine Education Center at CHOP.

The most common symptom of intussusception is sudden onset of intermittent pain in a previously well child. However, each child may experience symptoms differently. The pain may be mistaken for colic at first, and occurs at frequent intervals.

Infants and children may strain, draw their knees up, act very irritable and cry loudly. Your child may recover and become playful between bouts of pain, or may become tired and weak from crying.

Vomiting may also occur with intussusception, and usually starts soon after the pain begins.

Your child may pass a normal stool, but the next stool may look bloody. Further, a red, mucus or jelly-like stool is usually seen with intussusception.

Physical examination may reveal a “sausage-shaped” mass felt upon palpation of the abdomen.

Symptoms of intussusception may resemble other conditions or medical problems. Please consult a physician for a diagnosis.

If your child is in abdominal pain, call your doctor for an appointment as soon as possible. If your child cannot be seen soon, go to the Emergency Department to be evaluated.

A physician will obtain your child’s medical history and perform a physical examination to determine if he has intussusception.

Imaging studies are also done to examine the abdominal organ and aid in making an accurate diagnosis of your child. These tests may include:

Intussusception is not usually immediately life-threatening. It can be treated with either a water-soluble contrast enema or an air-contrast enema, which both confirms the diagnosis of an intussusception, and in most cases successfully reduces it.

An enema is done by placing a small tube into the rectum. Fluid or air is gradually added into the tube to allow clinicians to see the intussusception that is blocking the intestine via X-ray or ultrasound.

The pressure of the fluid or air pushes the telescoping bowel back to its normal position, fixing the problem.

There is a chance the intussusception can recur within 24 hours. For that reason, after the bowel is reduced, your child will stay in the hospital for an additional day to ensure there is not a recurrence.

Most of the time the enema will take care of the bowel problem. However, in 10-15 percent of cases, the bowel cannot be reduced and surgery is necessary.

In a reduction of the bowel surgery, the surgeon may choose to do the procedure with one larger incision (called an open procedure) or laparoscopically, with tiny incisions and a camera. Which surgical procedure is used will depend on your child’s condition.

If the surgeon is unable to successfully reduce the bowel, then the afflicted section will need to be removed. When this happens, the surgeon must remove the affected part of the intestine and sew the two healthy sections back together.

The intestines will be stitched with sutures that dissolve. The outside skin is usually closed with stitches that will dissolve and then covered with gauze and/or a clear dressing.

If your child had an enema, he will stay overnight in the hospital because there is a small chance of recurrence in the first 24 hours.

When the enema is complete, your child will pass the air out of the intestines. The gas may persist for a few hours after the test. It is normal during this time to have a fever and your child may be given Tylenol (Acetaminophen) to bring down the fever.

For the first 12 hours after the enema, your child will not be allowed to eat or drink. After that, we will offer your child clear liquids and, if tolerated, solid foods.

Once your child is eating and feeling better, you will be able to take him home. We ask you bring your child back to the hospital if any symptoms return.

If your child had surgery to treat intussusception, he will recover in the post-acute care unit for an hour or so, and then will be moved to a hospital room.

Your child may experience pain and will receive medication through an IV if needed. It is also normal to have a fever during this time, so Tylenol (Acetaminophen) may also be used to reduce the fever.

Your child’s incision may have a clear (derma bond) dressing or a gauze dressing. The clear dressing will dissolve. Gauze dressings are removed two days after surgery.

After surgery, your child may have small sips of clear liquids. If your child drinks fluids and does not vomit, we will allow him to slowly start eating again. Once your child is eating and feeling better, you will be able to take your child home. Your child may bathe or shower on the second day after surgery.

We will work with you to schedule a follow-up appointment with your child's surgeon 2-3 weeks after discharge. Your child may not participate in contact sports or gym until after the follow-up visit with the surgeon.

When to call the doctor

After your child has been treated for intussusception, it is important that you carefully monitor your child’s health. Call the doctor if your child experiences any of the following symptoms:

If your child suffers any of the signs or symptoms described above, he must be brought to the Emergency Department as quickly as possible to receive proper treatment.