Severe combined immunodeficiency (SCID) is a group of rare, life-threatening diseases that cause a child to be born with very little or no immune system. As a result, the child’s body is unable to fight off infections and can become very sick from infections like chickenpox, pneumonia and meningitis and can die within the first year of life. Treatment for SCID should be considered a pediatric emergency.

Commonly called the “bubble boy disease” or “boy in the bubble” syndrome, SCID became widely known in the 1970s and ’80s due to the publicity and later a movie about David Vetter, a boy with X-linked SCID, who lived in a plastic, germ-free bubble for 12 years. At the time, doctors believed the only way to treat children born with this rare disorder was to isolate them until they could receive a bone marrow transplant from related donor with a 100 percent human leucocyte antigen match.

Until a few years ago, the majority of children with severe combined immunodeficiency were not diagnosed until they were at least 6 months old and very sick. Many died in early childhood after repeated infections. Today, thanks to newborn screening in many states, early intervention, and advances in treatment, children with severe combined immunodeficiency can be successfully treated with bone marrow transplant and in some cases gene therapy.

Signs and symptoms of SCID

Symptoms of SCID usually become apparent within the first year of life and generally include repeated infections — both common and serious — that do not to respond to medications in a typical manner.

Babies that exhibit any of the following symptoms during the first year of life should be evaluated for SCID or another type of immunodeficiency:

Severe combined immunodeficiency is a group of hereditary disorders linked to defects of at least 17 different genes. These defects affect lymphocytes, a type of white blood cells, that become T cells, B cells and natural killer (NK) cells. T cells are the helper cells in the blood stream that encourage other cells in the body to respond to foreign substances and combat infections. In addition, some T cells are also able to directly detect and destroy infected or diseased cells. B cells produce antibodies that attack foreign substances such as viruses and bacteria. NK cells, like their name implies, are typically involved in the direct killing of diseased cells. In SCID, the immune-protecting skills of both T cells and B cells are affected.

There are several types of SCID, but some of the most common are:

X-linked SCID is caused by mutations in the IL2RG gene on the X chromosome. The mutation causes the gene to fail to respond to fight infection. Instead of mobilizing lymphocytes to mature, replicate and spread to fight infection when it is detected, a mutated IL2RG gene will do nothing — leaving the body defenseless to infection.

X-linked SCID typically affects males, who only have one X chromosome. Females have two X chromosomes, so if a gene on one is mutated, the other healthy chromosome can compensate.

Adenosine deaminase (ADA) deficiency, sometimes called ADA SCID, is caused by a mutation in the gene that encodes the protein called adenosine deaminase. The ADA protein is needed by all cells in the body to produce new DNA. The protein works by breaking down toxins in the body that would destroy the white blood cells. So when ADA is missing, patients have low numbers of T, B and NK cells. ADA deficiency can also affect hearing and brain development.

Testing and diagnosis of SCID

In 2010, the U.S. Secretary of Health and Human Services recommended adding severe combined immunodeficiency to the core newborn screening panel of 29 genetic disorders. By 2016, more than 40 states and U.S. territories had added SCID to their mandatory screening panels. Because of this change, more children with SCID are being identified in infancy and being treated earlier. 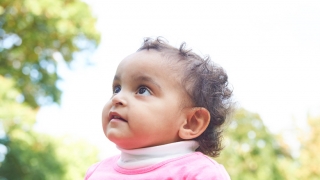 Audrey was diagnosed with severe combined immunodeficiency at birth and underwent a bone marrow transplant at CHOP when she was just 4 weeks old.

Following an abnormal newborn screen, blood testing to measure the number of the T, B and NK cells is needed to see if the newborn actually has SCID. The immunologist will also test the function of the T cells with another blood study. If the number of T cells is very low, genetic testing will be recommended to determine the type of SCID your child has so that this information can guide treatment recommendations.

For children who were not screened as newborns, a diagnosis of SCID is usually made in infancy or early childhood based on a complete medical and family history, physical examination of your child, blood tests and genetic tests.

Knowledge and timing are critical factors in treating a child with SCID. The sooner treatment can begin, the less likely the child will contract an infection that could be fatal to the child’s weakened immune system.

At Children’s Hospital of Philadelphia (CHOP), a multidisciplinary team of immunologists, geneticists and transplant physicians work together to develop a coordinated treatment plan to address your child’s unique needs.

In most cases, treatment will include:

Other treatments that may be used include:

The most common treatment for SCID is an allogeneic bone marrow transplant, which will introduce normal infection-fighting cells into your child’s body. Allogeneic transplants use stem cells from a relative or an unrelated donor from the National Marrow Donor Program.

An allogeneic bone marrow transplant involves taking cells from the bone marrow (the soft, spongy tissue found in bones) of a healthy donor and giving them to a child after the child’s diseased bone marrow has been eliminated.

Doctors at Children’s Hospital will screen your child’s family for potential bone marrow matches. While a tissue-matched sibling offers the greatest chance of curing SCID, they are not often available. Instead, most patients receive bone marrow donations from their parents or unrelated matched donors. Outcomes for these best-match donors have dramatically improved in the past 20 years.

For children with ADA SCID, enzyme replacement therapy may be used to repair the defective adenosine deaminase protein, allowing cells within the body to recover and begin combating infections. Enzyme therapy is given by injection and can have long-term benefits for some children with SCID.

Immunoglobulin replacement offers short-term protection from certain diseases — and can be customized — and helps people who have trouble making their own antibodies.

Gene therapy has offered new hope for patients who have not been cured after a bone marrow transplant, but it is still experimental.

Patients with an abnormal newborn screen are initially seen by the CHOP Immunology team to have their diagnosis confirmed. Once a diagnosis of SCID is confirmed, the referral is made to the CHOP BMT team. The BMT and Immunology teams work collaboratively before, during and after the HCT to take care of SCID patients.

There is a joint BMT/Immunology Clinic after transplant to monitor for development of healthy immune function. Patients with SCID will require lifelong monitoring of their immune system to be sure it stays healthy. This is done through bloodwork. In the first year after transplant the immune system is assessed every three months. Once there is evidence of the immune system working well, we will make recommendations to stop preventative antibiotics and immunoglobulin replacement. Once patients are off immunoglobulin replacement, our team will also make recommendations for vaccination. After the first two years, assessment is less frequent, typically about once a year.

Long-term outlook for children with SCID

Children diagnosed with SCID in infancy, treated in the first three months of life, and those who receive a bone marrow transplant from the donor-matched sibling have the highest success rates. Children who receive parent or non-relative transplants also have generally good outcomes if diagnosed and treated promptly

Because SCID is hereditary, parents of children with SCID should consider talking with a genetic counselor about any future family planning.