What is sudden cardiac arrest?

Sudden cardiac arrest (SCA) occurs when the heart suddenly and unexpectedly stops beating. It is caused by the immediate loss of electrical heart function, usually from an irregular and rapid quivering of the ventricles (called ventricular fibrillation).

Rarely, the abnormal rhythms can resolve on their own. Usually, though, these rhythms degenerate to ventricular fibrillation (cardiac arrest in which the heart is quivering) or asystole (cardiac arrest in which the heart stops beating). Early emergency treatment with cardiopulmonary resuscitation (CPR) or an automated external defibrillator (AED) can help restart a stopped heart and allow return of a normal heartbeat to help prevent sudden cardiac death (SCD).

Although SCA is rare in children, it can affect anyone, even those who are physically fit. Each year, SCA claims the lives of over 2,000 children and adolescents in the U.S. and accounts for approximately 3-5 percent of all deaths in children aged 5-19 years. It is also responsible for 10-15 percent of sudden unexpected infant deaths.

Sudden cardiac arrest occurs more frequently in males than females, and, in children, most commonly occurs between 10-19 years of age. Still, it’s important to note that SCA may occur in children of all ages, even infants.

Some other risk factors include:

If you have a family history of any of these conditions, immediate family members should be checked out for those conditions known to be inherited or caused by a genetic mutation. This can help you identify a condition early and possibly prevent SCA or SCD.

Sudden cardiac arrest is usually caused by ventricular fibrillation (VF), an abnormality in the heart's electrical system. VF causes the heart to quiver and blood flow to the body and brain to stop. VF is not the same thing as a heart attack. A heart attack results from a blockage in a coronary artery and subsequent damage to the heart muscle. A heart attack can lead to SCA.

Sudden cardiac death in childhood is typically caused by different heart conditions than those causing the majority of SCD in adults.

The most common causes of SCA in children are:

Conditions causing SCD are typically not diagnosed prior to the arrest. In many cases, these conditions are inherited, but family members are unaware of their family history.

Warning signs and symptoms do exist in 30-50 percent of cases of SCA/SCD, but are often ignored or misunderstood.

If your child has any of the warning signs or symptoms of SCA, make an immediate appointment with your pediatrician or take your child to the ER if they appear distressed in any way.

Warning signs and symptoms may include:

In more than half of the cases of SCA in children, death was completely unexpected. Young people are often unaware of the risk factors and don’t tell adults when they experience the symptoms. They may be frightened, embarrassed or simply unaware that what they are feeling indicates a potentially fatal problem.

Educating parents, children and teenagers about the symptoms and risk factors of SCA is one way to help prevent it.

If your general pediatrician suspects your child is at risk for SCA, she might refer you to a pediatric cardiologist, a doctor who specializes in heart problems in children.

Your child’s cardiologist might order other tests, such as an exercise stress test, echocardiogram, or chest X-ray. You might be sent home with an ambulatory cardiac event monitor or a Holter monitor to continuously record your child's heart rhythm for a specific length of time as she goes about her normal activities.

If your child has experienced one of the warning signs or symptoms of sudden cardiac arrest, their pediatric cardiology evaluation may indicate a normal heart needing no further testing. It could also result in further testing or follow up evaluations, if needed.

SCA requires immediate attention. If your child suddenly collapses and does not immediately awaken, call 911 and start CPR. If an AED is available, it should be applied.

The best chance of SCA survival is prompt recognition, and a planned emergency response with CPR and AED use.

If sudden cardiac arrest is not treated within minutes to establish a normal heart rhythm, a person will die. The heart is either quivering or has stopped completely, and cannot pump blood effectively. Blood flow to the brain and body stops and death results if life-sustaining care is not provided.

The chain of survival concept represents the sequence of five events that must occur quickly to optimize a person's chance of surviving a cardiac arrest. The five links of the chain:

CPR manually pumps blood around the body and maintains the circulation, allowing blood with oxygen to reach the body organs and brain, until a normal heart beat can be restored. Hands-only CPR is most effective when performed right after the collapse and when an AED is also applied quickly.

CPR should continue until emergency medical services (EMS) arrives and takes over, unless the affected person has a return of normal circulation (either spontaneously or after AED shock) and is awake (moving and breathing), and alert and talking.  Rescue breathing as part of CPR is recommended to be used by trained health professionals.

The heart must be “defibrillated” quickly, because a person's chance of surviving drops by 10 percent for each minute a normal heartbeat is not restored.

When the heart is in sudden cardiac arrest, an AED can deliver an electrical shock through the chest (which travels to the heart) to halt the abnormal, ineffective rhythm. This enables a normal heart rhythm to resume.

AEDs are safe for use by anyone who has been trained to use them, as well as bystanders who follow instructions given by the devices. Studies have shown that sixth-graders briefly trained in AED use are able to correctly operate the device almost as quickly as emergency medical personnel.

Broad deployment of AEDs and increased bystander CPR could prevent as many as 50,000 deaths each year in the United States that are caused by SCA. The current national survival from SCA is 8-10 percent. Placing AEDs in schools is a safe and effective way to increase survival rates to 64-74 percent.

Children’s Hospital of Philadelphia’s Youth Heart Watch Program has a School AED Program committed to making AEDs available to all children and adolescents. Watch this short video to see experts demonstrate how to perform CPR and use an AED

A pediatric cardiologist, cardiac electrophysiologist (EP) or surgeon may implant a defibrillator in a child or adolescent who has had a SCA or is thought to be at risk for having a SCA to prevent SCD. An implantable cardioverter defibrillator is a small computerized device with an energy source for defibrillation or pacing.

An ICD has wires with electrodes on the ends that connect to your child’s heart chambers. It can recognize a life-threatening abnormal rhythm and provide an electrical shock that allows the normal rhythm to resume.

An ICD is implanted following guidelines for children who have sustained a SCA and survived or who are thought to be at high risk for such a cardiac event. Children who have received an ICD for either reason may have these ICDs discharge to prevent SCD.

Primary prevention includes evaluation of those with warning signs and symptoms or a positive family history. Identifying a heart condition or other risk factors allows for early intervention with medication, lifestyle alterations, and defibrillation devices.

Secondary prevention refers to methods used to prevent sudden cardiac death from occurring once someone has experienced a sudden cardiac arrest. These methods include cardiopulmonary resuscitation (CPR), use of an automated external defibrillator (AED), or an implantable cardioverter defibrillator (ICD).

In an effort to prevent sudden cardiac death among children and adolescents, YHW runs a secondary prevention program that is committed to implementing AED programs in schools, recreation centers and other public places. Learn more about the School AED Program.

When sudden cardiac arrest is identified and treated, children and adolescents can be expected to have an excellent outlook or prognosis. Outcomes will vary depending on the cause of the SCA. 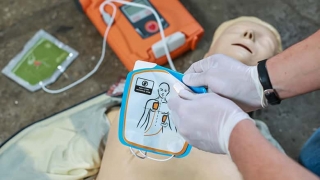 Know the signs of a sudden cardiac arrest — it could make the difference between life and death.

CPR and AED Could Save Lives

Learn simple rescue steps to save a life during sudden cardiac arrest.