When 5-year-old GP shares his story, it’s in an upbeat, short and dramatic way. “I have systemic JIA (juvenile idiopathic arthritis) and I almost died,” GP says. “But Dr. Burnham helped me get better. He saved my life.” 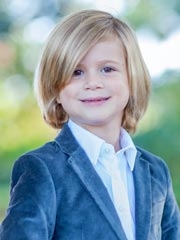 GP began having intermittent high fevers in October 2018, when he was 4 years old. His parents, Samantha and Paul, took him to multiple doctors – pediatricians, ear, nose and throat specialists and allergists – who all seemed to agree whatever was causing his fevers was viral and needed to run its course.

“But I didn’t believe that,” says Samantha, GP’s mom. “Something was really wrong.”

On Jan. 24, 2019, GP began to exhibit odd symptoms. He was limping and holding his arm in a strange way. Then, he developed a 104-degree fever. Samantha rushed him to a community hospital in Jupiter, Fla., near the family’s home.

Doctors ordered tests and discovered all of GP’s inflammatory markers were unusually elevated. They gave him medication for the pain and antibiotics to stop what they believed was an infection. X-rays, ultrasounds and a full-body MRI were performed. The only clue they found was fluid around GP’s hips and some other joints in his body.

Local doctors felt it was imperative that GP be seen by a pediatric rheumatologist. He was transferred by ambulance to a children’s hospital in Miami where he spent a grueling two weeks undergoing a battery of tests and being examined by multiple specialists from Rheumatology, Oncology, Immunology and Infectious Disease. Still, doctors were no closer to diagnosing GP’s condition and his health continued to deteriorate. Desperate for answers, GP’s parents initiated a transfer to Children’s Hospital of Philadelphia (CHOP).

Samantha remembers the night of Feb. 7 vividly. She and GP had been in the hospital for 14 days. It was 3:40 a.m., the family was exhausted and GP had been screaming in pain for hours. “We were just so frustrated. With all these doctors and tests, we were still no closer to knowing what was going on with him,” Samantha says.

GP loves this part of the story, jumping in to add: “That’s when mom lost her marbles so I could get out of that hospital.”

With multiple doctors, nurses, residents, a social worker and other clinicians in GP’s patient room, Samantha admittedly “flipped out” she says. “I knew in my heart that if I didn’t get him out of there, I was going to lose him.”

A few hours later, GP and Samantha were on an air ambulance to CHOP. When they arrived, GP’s condition was serious: his breathing was labored, he required increased oxygen, there was fluid around his heart, and his overall condition remained critical. GP was rushed to the Pediatric Intensive Care Unit (PICU) at CHOP where he was assessed by Andrew C. Glatz, MD, MSCE, an Interventional Cardiologist with the Cardiac Center, and Jon “Sandy” Burnham, MD, MSCE, Clinical Director of the Division of Rheumatology.

To address GP’s immediate cardiac issue, Dr. Glatz drained the fluid around GP’s heart. Dr. Burnham examined GP, reviewed all of his test results from Florida and preliminarily diagnosed him with systemic-onset juvenile idiopathic arthritis (JIA), the most serious, yet least common, form of JIA. This type of arthritis is characterized by joint inflammation and stiffness, rash, fevers and may cause inflammation of internal organs including the heart, liver, kidneys, spleen and lymph nodes.

“Dr. Burnham told us later that GP was one of the most critically ill children he’d ever seen with systemic JIA arriving at CHOP,” Samantha says.

Dr. Burnham started GP on a biologic medication and high-dose, pulse steroids. The goal was to calm the inflammation in the boy’s body and decrease the intensity of his symptoms. In three days, GP’s condition had improved substantially.

“At that point, he became a whole different kid,” Samantha adds. Soon after, clinicians were able to remove GP’s CPAP which was ensuring air flow to his lungs. His pericardial drain was removed by day 4, and his PICC line was removed after a week.

GP’s recovery was a long process. Though he’d been a busy and energetic boy before he got sick, after weeks laying in a hospital bed, his muscles had become weak. He needed to relearn how to sit up, stand and walk. “He just lost muscle tone so fast,” Samantha says.

GP had physical and occupational therapy for six hours a day at CHOP to relearn lost skills. Finally, after nearly 60 days in the hospital, GP was able to return home to Florida. A month later the family returned for a follow-up visit at CHOP.

At home, GP continued to improve, regaining fine and gross motor skills. By summer, he was running and actively playing with his sister Adalyn again. But he had a set-back in September 2019, when his high fevers returned along with other symptoms: swollen lymph nodes, red fingertips and blood pooling under the skin on his heels (purpura).

Once again, the family turned to CHOP for help. Dr. Burnham worked to find the right biologic immunosuppressant medication to address GP’s recurring symptoms. And in October, Dr. Burnham prescribed a new medication to GP, adjusting the dosage as needed.

GP took the medication for nearly a year before an unintended side-effect occurred: GP suddenly started stuttering. Dr. Burnham heard Samantha’s concern and worked to find another medication to treat his systemic JIA. Once on the new medication for a few weeks, GP’s condition improved. He no longer stuttered; there were no new breakthrough fevers and his fingertips were no longer red. 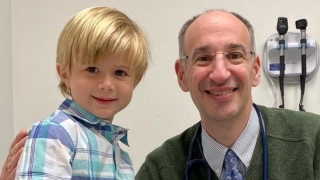 GP and Dr. Burnham GP is now an active 5½-year-old who loves playing flag football, jet skiing, Legos and watching Clemson football, where his late grandfather, George, was a running back. GP attends kindergarten virtually due to the COVID-19 pandemic, but is anxious to meet his classmates in person for first grade. GP continues to receive occupational therapy to improve his fine motor skills.

“I hope and pray remission is in the cards for GP so he won’t need medication every day,” Samantha says. “But more research is needed about systemic JIA – the genetic basis of the disease, what other treatments are available and kids like GP need a cure.”

Samantha and Paul are thankful to Dr. Burnham and the Rheumatology team at CHOP for thinking outside-the-box, for listening to their concerns, and for working with them to find treatments that work for GP.

Dr. Burnham and CHOP have made a lasting impression on GP. In fact, it’s helped forge his future goals: “I want to go to college, play football like my Pappa George did and become a rheumatologist like Dr. Burnham so I can save lives. He’s my hero.”