On a Saturday afternoon in June, a 3-year-old boy presented to CHOP Urgent Care with concern for intermittent low-grade tactile fevers for 3 days and development of left-sided ear pain on the day of his visit. His mother reported he is drinking fluids well and is active, but less so than usual. She also reported that over the course of the last day or so he developed a large, roughly circular red rash around his ear, involving his cheek and neck, that seemed to extend into his hair. The rash did not bother or itch him. The mother denied use of any new soaps, lotions, creams, or detergents. He did not ingest any new foods, and the patient did not have any known food or medication allergies. 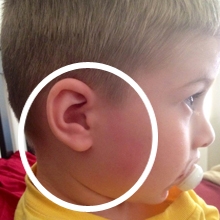 Figure 3: The erythema migrans bull’s eye lesion. On exam, the patient appeared nontoxic and was cooperative and interactive. His left tympanic membrane was erythematous with distorted landmarks, and he had dried secretions in both nares. There was a faintly erythematous, slightly irregular circular macule approximately 7 cm in diameter that encompassed an area from approximately 1 cm above his right ear and extended to the preauricular area down to his neck and disappeared in the hair of his scalp (see Figure 3). The boy was diagnosed with left acute otitis media and given a prescription for a 10-day course of amoxicillin. The provider was initially unsure of what to make of the rash around his right ear, but counseled the mother to follow up with her pediatrician within a week if the rash did not resolve. The mother agreed with the plan of care, and the family left the Urgent Care. For the following hour, the provider thought about the rash before adding erythema migrans, Lyme disease, to the diagnosis. She called the parent at home to discuss further.

According to the Centers for Disease Control and Prevention, Lyme disease patients are most likely to have onset of the illness during June, July, or August. Children and adolescents are at a higher risk for getting Lyme disease because they often play in or near heavily wooded, bushy, and overgrown grassy areas.

When the Urgent Care provider called the mother, she asked if the child had any recent tick bites. The mother reported that her son had 2 ticks removed over the past month, 1 from his scalp and the other from his diaper area and that he often plays in a grassy patch in their yard. The provider then explained that her son’s rash was likely that of the bull’s eye lesion of Lyme disease called erythema migrans. In this case, the pinna of the ear had obscured the central portion of the lesion, giving it a slightly atypical appearance. The provider then advised the mother to take a picture of the rash with her smartphone and to bring it to her pediatrician’s office for a follow-up appointment within the week. The provider also informed her that the amoxicillin her son had already started would treat both of his diagnoses, but he would need to complete a longer course for Lyme disease.

The provider then called the child’s pediatrician to discuss the case and ensure that the family would get proper follow-up. The patient went on to complete a 21-day course of amoxicillin without development of further sequelae. Though not necessary, at the end of the treatment course, the diagnosis was confirmed by serologic testing.

In terms of treatment, according to the CDC, the presence of the erythema migrans rash is pathognomonic for early Lyme disease and should prompt immediate initiation of treatment. Pediatric treatment regimens are as below:

Both facilities have onsite labs and X-ray equipment and are open 365 days a year. No appointment required.