Published on Apr 30, 2014 in A Child's Sight , International Update

In a genetically caused ophthalmic disease, knowing the causative gene defect helps in counseling the patient and the parents about the severity of disease, visual prognosis, and future gene-directed treatment. It also allows patients to understand the risk of their children inheriting the defect and its potential clinical repercussions. This is the case of a 15-year-old boy who had suffered night blindness since early childhood and had been clinically diagnosed with retinitis pigmentosa (RP). (See Figure 1.) 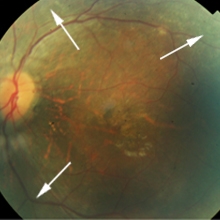 His best-corrected visual acuity was 20/60 in both eyes. He was the only known person affected in his family. Coding regions of all genes were analyzed with whole exome massively parallel sequencing to try to identify the causative mutation in the responsible gene. Typical for massively parallel sequencing results, several potentially disease causing variations in the patient’s genes were identified. 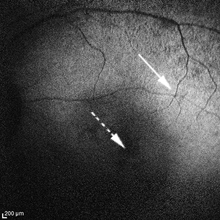 Figure 2 They included 1 variant each in 3 different RP genes, and 1 in RP2 on the X chromosome. RP2 is a gene in which mutations lead to X-linked RP. To make sense of the vast amount of data obtained through massively parallel sequencing, and to try to discover the real disease-causing mutation in our patient, we examined both the patient (see Figure 2) and his mother (see Figure 3) using blue light autofluorescence (BAF) imaging. BAF imaging is dependent on lipofuscin content in the retinal pigment epithelium (RPE). When too much of it is present, following increased metabolic turnover in the RPE due to photoreceptor disease such as RP, hyperautofluorescence is noted on images. 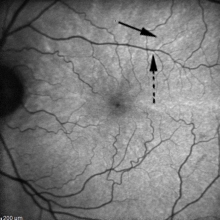 The mother’s images did show a feathery pattern of alternating normo- and hyperautofluorescence, highlighting a heterozygous state (lyonization) for X-linked RP. The mother was subsequently confirmed to be a carrier (heterozygote) for the causative RP2 mutation with DNA analysis. This is a nice example of how finding signs of lyonization, visible on BAF imaging, guided the proper interpretation of confusing molecular results to a diagnosis of X-linked RP.

This case illustrates that a thorough clinical workup remains an essential part of clinical medicine in the era of widely available and rapid genome analysis.