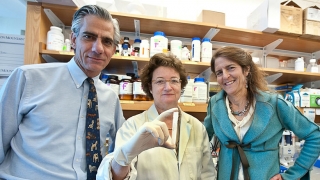 Children’s Hospital of Philadelphia (CHOP) celebrates a pivotal moment in medicine: approval by the European Commission (EC) of LUXTURNA® (voretigene neparvovec), the first and only gene therapy for patients with an inherited retinal disease, last month. This also makes LUXTURNA the first gene therapy for a genetic disease that has received regulatory approval in both the United States and European Union (EU).

The EC approved LUXTURNA, a one-time gene therapy for the treatment of vision loss due to inherited retinal dystrophy caused by confirmed biallelic RPE65 mutations, in pediatric and adult patients who have sufficient viable retinal cells. RPE65 -mediated inherited retinal disease is a progressive condition that leads to total blindness in most patients.

The authorization is valid in all 28 member states of the EU, as well as Iceland, Liechtenstein and Norway. In December 2017, the U.S. Food and Drug Administration (FDA) approved LUXTURNA for use in patients in the U.S.

“The European Commission’s approval of LUXTURNA highlights the vital role of pediatric research in developing breakthrough cures,” said Bryan Wolf, MD, PhD, Chief Scientific Officer and Chair of the Department of Biomedical and Health Informatics at Children’s Hospital of Philadelphia. “The research conducted as a collaborative effort between CHOP’s Raymond G. Perelman Center for Cellular and Molecular Therapeutics (CCMT) and investigators at the Perelman School of Medicine at the University of Pennsylvania laid the groundwork for this revolutionary gene therapy, which was developed and is now manufactured by Spark Therapeutics. Today, we are thrilled to see LUXTURNA approved as a therapy for children and adults outside the U.S.”

CHOP founded Spark Therapeutics in 2013 in an effort to accelerate the timeline for bringing new gene therapies to market. Spark’s mission, to create a world where no life is limited by genetic disease, was to build on the foundational research conducted over a multi-year period by the CHOP and Penn Medicine teams.

Beginning in 2000, the initial research for LUXTURNA was conducted by Jean Bennett, MD, PhD, F.M. Kirby professor of Ophthalmology at the Perelman School of Medicine at the University of Pennsylvania’s Scheie Eye Institute, and Albert M. Maguire, MD, a professor of Ophthalmology at Penn’s Perelman School of Medicine and an attending physician at CHOP. Bennett and Maguire joined forces with then-CHOP researcher Katherine A. High, MD, a gene therapy pioneer who directed the CCMT and who is now Spark’s President and head of research and development. Dr. Maguire served as a Principal Investigator of the therapy’s clinical trials.

In the U.S., the gene therapy is currently administered at 10 treatment centers by leading retinal surgeons who receive training provided by Spark Therapeutics on the administration procedure.