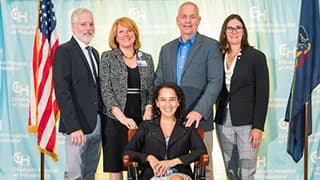 During a ceremony held Sept. 4, Children’s Hospital of Philadelphia (CHOP) celebrated the establishment of the Patricia Brophy Endowed Chair in Pediatric Neuroblastoma Research. Pediatric oncologist and researcher Yael Mossé, MD, Director of the Neuroblastoma Development Therapeutics Program at CHOP has been named the inaugural holder, established to support the discovery and development of new therapies for patients with neuroblastoma.

“Dr. Yael Mossé is a proven innovator as a member of CHOP’s world-class neuroblastoma team, a global leader in bringing new treatments and potential cures to reality,” said Joseph St. Geme, MD, Physician-in-Chief, Chairman of the Department of Pediatrics, and holder of the Leonard and Madlyn Abramson Endowed Chair in Pediatrics at CHOP. “Dr. Mossé also has a special connection to Alex’s Lemonade Stand and founders Liz and Jay Scott, who have been longtime and valued supporters of the Division of Oncology. We are truly grateful for their commitment to making a difference in the outcomes of children with this challenging disease.”

“Pat Brophy had a big impact on our family's life, and on the lives of so many other childhood cancer families,” said Jay Scott, who noted funds came directly from generous donations to CHOP made in their daughter Alex’s memory. “We are lucky to be able to honor her life and accomplishments through this endowment. As Yael accomplishes more great things in her career, Pat will be a part of them.”

Neuroblastoma is one of the more common childhood cancers, but cure rates have improved only slightly over the last two decades, and only by using increasing doses of highly toxic chemotherapy. It typically develops in the nerve cells near the spine of infants and toddlers, presenting as tumor in the belly or chest. It’s a complex tumor with many subtypes caused by gene mutations.

Dr. Mossé treats a high volume of patients with high-risk neuroblastoma, including that of 8-year-old Alex Scott, who died in 2004. In the ensuing years, Dr. Mossé led a breakthrough discovery: identifying the most common neuroblastoma-specific cancer-causing mutation in the anaplastic lymphoma kinase (ALK) gene, and subsequently showing that the cancers respond to a targeted therapy she developed that can send the disease into remission.

“It’s children like Alex who succumb to this awful disease who inspire me every day in the clinic and the lab,” said Dr. Mossé. “This generous funding is critical: we’re moving quickly on new research, and on translating that information into clinical trials of therapies that are more effective, and less toxic for developing young bodies. We’re battling an often treatment-resistant enemy here. But we’re encouraged at every turn by what our patients are teaching us, and believe this research funding will continue to fuel the momentum we’ve achieved in reversing high-risk neuroblastoma in the last few years.”

“Dr. Mossé has a proven track record of translating discoveries into the clinic to bring potential new cures to children with cancer,” said Stephen Hunger, MD, Chief of the Division of Oncology, Director of the Center for Childhood Cancer Research, and holder of the Jeffrey E. Perelman Distinguished Chair in the Department of Pediatrics. “Endowed chairs are critical to our mission: It’s only when we give the most talented doctors and scientists in the world the freedom to pursue their biggest and best ideas that we achieve the breakthroughs that allow us to give children the most advanced care at a time when they need it most.”

Patricia “Pat” Brophy was one of Alex’s nurses at CHOP. Beloved by many patients and families for her skill and her warmth, Pat was the inaugural recipient of the annual Alex’s Lemonade Stand Foundation Pitcher of Hope Award. Pat passed away in 2008 after her own battle with cancer.

Establishment of this Endowed Chair was first announced at CHOP in June 2018, during Alex’s Lemonade Stand Foundation’s 15th annual ‘Lemonade Stand’ at CHOP to benefit pediatric cancer research. Pat’s husband Bob and daughter Megan were present at the ceremony.