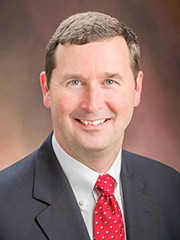 The Children’s Hospital of Philadelphia (CHOP) announces the selection of John M. “Jack” Flynn, MD, a nationally prominent specialist in pediatric orthopedic surgery, as its new chief of the Division of Orthopedics.

Dr. Flynn will assume his new position on Dec. 1. He has served as the associate chief of Orthopedics at CHOP since 2005, in one of the nation’s largest and most active pediatric orthopedic centers, one with a 120-year history of caring for children.

“We congratulate Dr. Flynn on his well-deserved selection as the division’s new leader,” said N. Scott Adzick, MD, Surgeon-in-Chief at The Children’s Hospital of Philadelphia. “I announce his appointment with great pleasure and look forward to his continued contributions in this new role.”

Dr. Flynn succeeds John Dormans, MD, who has led the Division of Orthopedics for the past 18 years. Dr. Dormans is remaining at CHOP and will focus on his work in treating children with musculoskeletal tumors, scoliosis and spine disorders, as well as other complex orthopedic problems. “Dr. Dormans oversaw spectacular growth in orthopedic surgery faculty and a crucial expansion in the division’s fellowship program, enhancements to our basic research, and the development of several important multidisciplinary programs,” said Dr. Adzick, adding, “It has been my privilege to work with Dr. Dormans for many years and I would like to thank him for his many accomplishments.”

Pioneer in use of image-guided navigation for pediatric spinal deformities

Dr. Flynn has a particular research interest in scoliosis, an abnormal curvature of the spine. He has pioneered the use of image-guided navigation for pediatric spinal deformities, an innovation that significantly improves the safety of implant placement.

Dr. Flynn has collaborated with other pediatric spine leaders across the U.S. to co-author some of the most important papers and guidelines in spine surgery safety, especially the prevention of neurologic injury and infection. He just completed a term as President of the Pediatric Orthopaedic Society of North America and was recently appointed to a 10-year term as a director of the American Board of Orthopaedic Surgery.

He has published over 220 peer-reviewed scientific articles, reviews and textbook chapters, and is an editor of the three principal texts in pediatric orthopedic surgery.

Dr. Flynn is a graduate of Johns Hopkins University and the University of Pittsburgh School of Medicine. He completed his surgical training in the Harvard Combined Orthopaedic Surgery Program, followed by a pediatric orthopedic fellowship at A.I. duPont Hospital for Children. He has practiced at CHOP since 1996 and is a professor of Orthopedic Surgery in the Perelman School of Medicine at the University of Pennsylvania. In addition to serving as CHOP’s associate chief of the Division of Orthopedics since 2005, he also has been the associate Trauma director for Orthopedics since 1996.