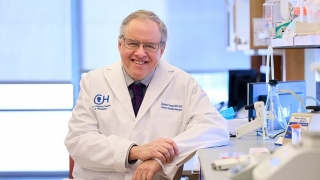 Today Children’s Hospital of Philadelphia (CHOP) announced that it has received a significant gift from Susan and Steve Kelly, local philanthropists and long-time supporters of CHOP, to establish the Susan S. and Stephen P. Kelly Center for Cancer Immunotherapy. The new Center, led by Dr. Stephan Grupp, will allow CHOP to create a more robust infrastructure to expand pediatric clinical trials and accelerate the U.S. Food and Drug Administration (FDA) approval of novel treatments; increase the pipeline of innovative therapeutics and diagnostics; recruit and train top investigators and postdoctoral researchers to become the next generation of cancer immunotherapy experts; and increase equity and access to cell therapy clinical trials for socioeconomically disadvantaged patients.

“Cell and gene therapy is a major emphasis at CHOP. With this significant investment from Steve and Susan, CHOP is now positioned, unlike any other academic medical center, to leverage our clinical and scientific expertise in the cell and gene therapy space to better care for pediatric patients and families in Philadelphia and around the world,” said Dr. Grupp, Inaugural Director of the Susan S. and Stephen P. Kelly Center for Cancer Immunotherapy, and Chief of the Cellular Therapy and Transplant Section in the Division of Oncology at CHOP. “The Kellys’ unwavering commitment to CHOP and the Cancer Center will allow us to forge ahead and identify new therapies for sick children sooner, bringing us one step closer to our ultimate goal: prescribing every child diagnosed with cancer a targeted therapy based on their genetic makeup, their cancer’s makeup, and the makeup of their own immune system.”

Steve and Susan Kelly have a longstanding partnership with CHOP’s Cancer Center and have supported Dr. Grupp’s research in developing a type of cellular therapy known as CAR T-cell therapy for children with B-cell acute lymphoblastic leukemia (ALL). The combined efforts of Dr. Grupp and his team, along with investigators from the University of Pennsylvania and Novartis Pharmaceuticals, paved the way for the first-ever FDA approval of a CAR T-cell therapy in August 2017. To date, our No. 1 ranked pediatric oncology program has treated more than 440 children with CAR T-cell therapy, recently publishing a >95% remission rate for patients with relapsed ALL. Emily Whitehead, the first child to undergo experimental CAR T-cell therapy treatment, remains cancer free nearly 10 years later.

“We are honored our gift will help CHOP and Dr. Grupp to unlock the tremendous potential of cancer immunotherapies,” said Steve and Susan Kelly. “We hope that our gift helps children around the world overcome the toughest forms of cancer and reclaim their lives, so that their future is defined by their dreams and not by a cancer diagnosis.”

The Kelly family’s transformative gift will also advance CHOP’s ability to deliver cell therapies to even more patients, using procedures to genetically modify a patient’s own bone marrow stem cells to cure inherited blood disorders, which affect more than 100,000 patients in the United States. “This is just the beginning of bringing the cell therapy revolution to patients with inherited disorders,” said Dr. Grupp.