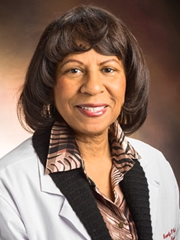 In honor of Black History Month, NBC10 recently sat down with Beverly Coleman, MD, Radiologist and Director of Fetal Imaging in the Center for Fetal Diagnosis & Treatment (CFDT) at Children’s Hospital of Philadelphia. An accomplished physician who has been performing fetal ultrasounds since the method was invented, Dr. Coleman’s skilled precision routinely leads to additional findings, and at times, even alters the patient’s initial diagnosis.

Dr. Coleman received her medical degree from Harvard University, and completed a residency in radiology, followed by a fellowship at the Hospital of the University of Pennsylvania (HUP). She has more than three decades of experience and has worked with the CFDT since it opened in 1995. Dr. Coleman remains one of the first and few African Americans in the nation among her peers.

An inspiration to many, she approaches every case with care and provides families with information allowing them to make well-informed decisions. As a mother herself, she relates to her patients on a personal level.

View the full story as told by her own daughter, NBC10 anchor Erin Coleman.