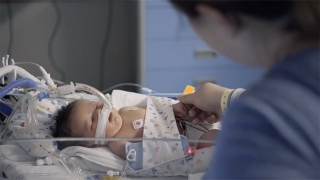 Researchers at Children’s Hospital of Philadelphia (CHOP) have led an international group of experts in developing new guidelines for neonatal resuscitation research. The guidelines, developed by the International Liaison Committee on Resuscitation Neonatal Life Support Task Force, will standardize data definitions for those engaged in this area of research, allowing for better comparisons across studies and ultimately better outcomes.

Learn more about the new guidelines, which were published in Pediatrics, here.

The SDU Newborn/Infant Stabilization Team is comprised of clinicians highly skilled in the delivery room care of babies with known congenital birth defects.

CHOP researchers have found that before the wide availability of vaccines, newborns were infected with SARS-CoV-2 at variable rates and without apparent short-term effects.

CHOP researchers found that a plurality of hospitals delivers fewer than 500 infants per year and that nearly a fifth of low-volume hospitals are more than 30 miles from another obstetric hospital.