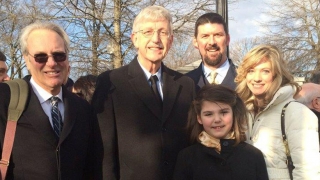 Outside the White House before President Obama’s announcement of the Precision Medicine Initiative are CHOP CEO Dr. Steven Altschuler, NIH Director Dr. Francis Collins, and the Whitehead family: Emily and her parents Tom and Kari The Precision Medicine Initiative, which President Obama first announced in his 2015 State of the Union speech, calls for new funding to build a national infrastructure to help sophisticated biomedical data flow from health clinics to DNA sequencing labs and back again as innovative treatments. The National Institutes of Health, Food and Drug Administration, and the Office of National Coordination for Health Information Technology will be involved in this program, which would allow researchers to custom-design more effective therapies based on a patient’s individual genetic profile.

“I am thrilled that President Obama recognizes the promise of our nation’s research efforts by making this investment. Today’s announcement signifies his commitment to bringing this issue to the forefront of our national agenda,” said Steven M. Altschuler, MD, chief executive officer of The Children's Hospital of Philadelphia.

He continued, “As a world leader in precision medicine, The Children’s Hospital of Philadelphia has made significant investment in its Center for Applied Genomics with the goal of diagnosing and curing pediatric disorders. We have already made strides harnessing this technology to better understand and treat cancer, autism, asthma, diabetes and many other childhood illnesses. Emily Whitehead’s personal story is a testament to the real impact this groundbreaking research can make in saving lives.”

Emily Whitehead, of Philipsburg, PA, was diagnosed with acute lymphoblastic leukemia (ALL) at the age of four. After multiple relapses, she was out of standard treatment options. In 2012, she became the first child to enroll in the clinical trial for T cell therapy, which bioengineers a patient’s own immune cells to hunt down and eliminate cancer cells. The custom-designed cells then remain in a patient’s circulation to guard against the cancer’s resurgence. Today, Emily has been cancer-free for more than two years. She is active in school and loves playing with her dog, Lucy.

Emily has appeared prominently in many news stories since her doctors announced dramatic findings during a December 2012 scientific meeting. Just last month, CHOP researchers and colleagues announced continuing promising results. In 39 children with ALL treated with T cell therapy in ongoing clinical trials, 36 had no evidence of cancer one month after treatment. The Food and Drug Administration has officially designated this approach as a Breakthrough Therapy, helping to expedite its progress into broader clinical trials.

For more information about the ways in which CHOP research is helping to shape the future of medicine, visit http://www.research.chop.edu.