It was October 2011 when Emily Whitehead’s cancer relapsed for the first time.

The 7-year-old girl had been fighting the most common childhood cancer, acute lymphoblastic leukemia (ALL), for more than a year.

Eighty-five percent of children with ALL are cured after a two-year process of standard chemotherapy, but 15 percent have a type of disease that is resistant to even the most intense chemotherapy regimens.

While Emily’s local oncologist at first thought she had “a garden-variety leukemia,” the relapse proved she was up against the type of disease that was more resistant to treatment.

Emily’s parents, Kari and Tom, were concerned about the next step for their daughter. They wanted a second opinion, and turned to Susan Rheingold, MD, of the Cancer Center at Children’s Hospital of Philadelphia. Dr. Rheingold confirmed what their local oncologist had recommended — try another round of more intense chemotherapy to see how Emily’s cancer would respond. But she promised the family that she’d be there with more options if they needed them.

Just four months later, they needed more options. Emily relapsed for a second time in February 2012, during her second course of chemotherapy.

“It was at that point that we made the decision that we needed to go somewhere else,” says Kari. “We needed to try something new, different and cutting-edge. And Dr. Rheingold, at that point, said, ‘It's time to come here to CHOP.’”

That conversation occurred on a Sunday afternoon. Monday morning, the family arrived in Philadelphia, and there was a complete plan in place for the next steps in Emily’s care.

At CHOP, Kari and Tom were introduced to the idea of enrolling their daughter in a clinical trial, the type of cutting-edge option they’d been looking for. They learned that Emily qualified for an experimental T-cell therapy for advanced B cell leukemias and lymphomas.

In certain cancers, including the type of ALL that Emily was battling, a subset of cells in the immune system become leukemia. These are called B cells. Another set of cells in the immune system, called T cells, normally recognize and attack invading disease. But in cancers like ALL, the abnormal leukemia cells fly under the radar of the normal T cells that are meant to kill them.

In the experimental treatment, Emily's T cells would be collected from her blood, then reprogrammed in a lab to recognize and attach to a protein called CD19 that is found only on the surface of B cells. After this reengineering, the cells are called chimeric antigen receptor T cells. When the reengineered cells are put back into the patient, they disperse throughout the body to find and kill cancerous B cells.

At the time Emily’s family was considering the trial, several adult patients had already been enrolled in the study at the Hospital of the University of Pennsylvania and had responded well. After several conversations with Dr. Rheingold and Stephan Grupp, MD, PhD, the oncologist leading the study at CHOP, the family decided to take the risks that come with experimental treatment, and enroll Emily in the trial.

On April 17, 2012, Emily became the first pediatric patient to be treated with T-cell therapy.

The Whiteheads were told Emily might experience flu-like symptoms a few days after being infused with her reprogrammed T cells, similar to the adult patients who had already been treated. But as is sometimes the case with experimental treatments, Emily’s symptoms were much more serious than doctors anticipated. She became critically ill and was admitted to the pediatric intensive care unit (PICU) at CHOP.

Dr. Grupp and a team of scientists worked quickly to determine what had caused her sudden illness. They learned that the level of a certain protein had become very elevated as a result of the T cells growing in her body. This same protein is involved in rheumatoid arthritis, and there is a drug for that disease that turns off production of that particular protein. The team administered the drug to Emily, with dramatic results: her condition improved faster than anyone could have hoped for. Almost overnight, her breathing improved, her fever dropped and her blood pressure was back to normal. 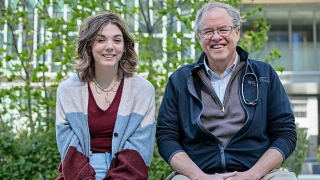 Pictured: Emily with Dr. Grupp In the weeks that followed, Emily recovered completely from the illness, called cytokine release syndrome, which resulted from the therapy. There’s no doubt in Kari’s and Tom’s minds that it was in part due to the prayers of thousands of supporters across the country who were following every turn in Emily’s story. But doctors were still unsure whether the T cell therapy was working. Several weeks after her T cell infusion, they were able to conduct a bone marrow test to find out.

“Three weeks after receiving the treatment, she was in remission,” says Dr. Grupp. “Emily completely responded to her T cell therapy. We checked her bone marrow for the possibility of disease again at three months and six months out from her treatment, and she still has no disease whatsoever." Now more than 10 year later, the cancer-fighting T cells are still there in her body.

“I've always been cautious about calling this a cure,” Dr. Grupp says. “We actually refer to it as the ‘C word.’ But now we're 10 years out. Do I believe Emily is cured? Do I believe other children who are five or nine years out from their CAR T therapy are cured? I believe they are.”

Emily remembers little from that time at CHOP 10 years ago besides what she calls “the fun times, like playing air hockey with my dad or going to the playroom.” Next year she’ll be a senior in high school, and outside of her role in the cancer history books, she’s a typical teen. “I currently have my license, so I have been driving as much as I can,” she says. She’s prepping for college: “I'll be taking the SATs in June. I would really like to pursue something with film or environmental science.”

“T cell therapy was really the only option left for Emily,” says Tom. “But we entered her into the trial really hopeful, and from the very beginning we just really had a good feeling about it. So all along we said, ‘it just has to work, it has to work for Emily’ — and it did.” He adds: “To look at her every day and to see what a cure for cancer actually looks like — it's pretty amazing.”

Not all patients who receive CAR T for relapsed ALL reach the same outcome as Emily. Currently, more than 90% of patients who receive CAR T-cell therapy for relapsed ALL go into remission; approximately 50% of those patients will remain cancer free. Researchers are continuing to advance the field so that more patients never relapse. Because CHOP is the pediatric oncology program with the most CAR T experience — having to date treated more than 440 patients, who have come to CHOP from across the globe — the program remains poised to further improve those outcomes.

In addition, Dr. Grupp says there has been a change in thinking surrounding enrollment in clinical trials for cancer patients. Rather than waiting until a patient is nearly out of options to consider experimental treatment options, oncologists are recognizing patients who might qualify for CAR T-cell therapy and other clinical trials earlier in the process.

“If we have a patient with high-risk disease where we think cell therapy might be necessary down the line, we’ll collect the cells now while the child is still reasonably healthy. It’s an insurance policy for the future.”

In the long term, Dr. Grupp sees the potential for cell therapies like this as a possible replacement for bone marrow transplant. “I’ve been meeting with families to discuss bone marrow transplant for 25 years,” he says. “In almost every meeting, I say that bone marrow transplant is very hard and that if we had an alternative for children at that point in treatment, I would be delighted to put myself out of business. And for the first time, we’re seeing how that might actually happen.”