Think back to February 2021, when COVID-19 had most of the world firmly in its grip and most children in public schools were still being taught virtually.

While many private and charter schools had resumed in-person instruction relying on social distancing, masking and other mitigation efforts to keep students and staff safe, most public schools, including the School District of Philadelphia, lacked the funds for those types of measures. Eleven months into pandemic, children in virtual classrooms were falling further and further behind.

Vaccines had been approved, but school personnel were not included on the city of Philadelphia’s list of high-priority essential workers. Children’s Hospital of Philadelphia has just completed a successful campaign immunizing 14,000 of its own employees, so the multidisciplinary team that had organized that effort proposed to vaccinate 20,000 teachers so kids could get back in the classroom.

“Given the growing mental health and academic challenges that children were facing by not being in school,” says Chief Medical Officer Ron Keren, MD, MPH, who led the effort, “we recognized that if immunizing school personnel was one of the keys to getting teachers and students back in the classroom, it would be an effective way for us to have a positive impact on the well-being of the children of Philadelphia.” 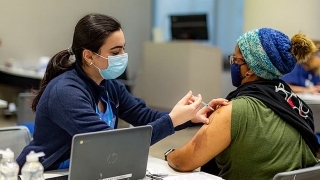 Example of school vaccine clinic The COVID vaccine was offered to teachers and personnel in public, charter, independent and Archdiocesan schools, plus preschool teachers — about 38,000 people in all.

CHOP was able to secure enough vaccine to immunize such a large group by partnering with the Philadelphia Department of Public Health because CHOP had the capability to store the Pfizer vaccine, which requires ultracold storage and complicated handling from freezer to arms — requirements many other organizations were unable to meet.

Six vaccination sites in schools across the city were selected because each had a gymnasium or large auditorium available for use, was ADA compliant, had adequate parking and provided access to all communities. An additional location was the Roberts Center for Pediatric Research, a CHOP research building with easy access to I-76.

The hospital’s Information System (IS) department vetted and recommended an online system for inviting and scheduling school personnel for vaccine appointments, and documenting who received the vaccine. CHOP’s IS team also worked with the schools to set up Wi-Fi networks so the system would work. 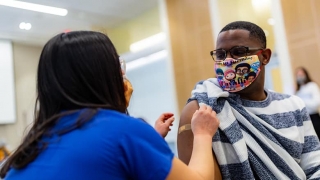 Adult getting the vaccine at a school clinic Vaccine clinics were offered six days a week, three sites per day, rotating across the school locations and the hospital site. Hundreds of CHOP employees volunteered their time to greet, register, vaccinate and observe Philadelphia school and daycare personnel at the clinics.

“It was amazing to see how everyone across CHOP — from our clinicians who administered the shots to the pharmacy that managed the safe transport of the vaccine to the IS department to the many, many other employees who volunteered as greeters and observers — pitched in to make this happen,” Keren says. “I’m incredibly proud of how it all came together.”

In six weeks, CHOP delivered two doses of the Pfizer vaccine to 19,100 school and daycare personnel.

“We are thankful for Children’s Hospital of Philadelphia and the Philadelphia Department of Public Health for their assistance with getting School District of Philadelphia personnel access to COVID-19 vaccinations,” says then Philadelphia school superintendent William R. Hite Jr.