Dogs with craniofacial defects help patients from The Children’s Hospital of Philadelphia embrace their facial differences during a “Best Friends Bash” at Penn Vet.

July 18, 2013 — Twenty craniofacial patients from The Children’s Hospital of Philadelphia (CHOP) had the opportunity to meet four canines with similar conditions at the first ever “Best Friends Bash” July 17 at Penn Vet. 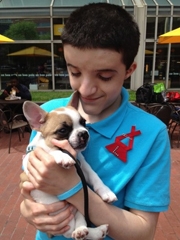 Lentil visits with CHOP patients. This meaningful partnership between Penn Vet and CHOP helped children see how dogs are affected by similar problems and how they have adapted. During the event, CHOP patients interacted with four Penn Vet patients:

“It was incredibly powerful watching these remarkable kids interact with these remarkable dogs,” said John Lewis, VMD, Associate Professor of Dentistry and Oral Surgery at Penn Vet. “These canine patients serve as specialized therapy dogs, so children can really relate to them. Since both the dogs and children are dealing with the same problems and treatments, there’s an instant bond that allows the children to realize they are not alone.”

“Craniofacial problems are complex medical conditions that can also negatively impact children's feelings about themselves,” said Scott P. Bartlett, MD, chief of the Division of Plastic Surgery at CHOP. “Despite this, our patients show great resilience and strength. They strive to return normalcy to their lives — often while coping with major surgeries and other therapies throughout their childhood and adolescence. Events like this are a great opportunity for these children to see how dogs affected by similar problems have adapted.”

Also in attendance were clinicians and nurses from CHOP’s Division of Plastic and Reconstructive Surgery and Penn Vet’s dentistry and oral surgery team, who discussed cases and learned from each other’s techniques.

The Best Friends Bash was funded by a grant from Penn’s Center for Human Appearance.

Penn Vet is one of the world’s premier veterinary schools and is the only school in Pennsylvania graduating veterinarians. Founded in 1884, the school was built on the concept of Many Species, One Medicine™. The birthplace of veterinary specialties, the school serves a distinctly diverse array of animal patients at its two campuses, from companion animals to horses to farm animals.

The Children’s Hospital of Philadelphia was founded in 1855 as the nation’s first pediatric hospital. Through its long-standing commitment to providing exceptional patient care, training new generations of pediatric healthcare professionals and pioneering major research initiatives, Children’s Hospital has fostered many discoveries that have benefited children worldwide. Its pediatric research program receives the highest amount of National Institutes of Health funding among all U.S. children’s hospitals. In addition, its unique family-centered care and public service programs have brought the 527-bed hospital recognition as a leading advocate for children and adolescents.