Eosinophilic esophagitis (EoE) is a chronic food allergy that affects the esophagus, the tube that connects the mouth to the stomach. The disease occurs when eosinophils, a type of white blood cell, accumulate in the esophagus causing pain and injury.

Specific foods cause EoE, but currently there are no tests to quickly and easily identify which foods are responsible for this disease in a particular individual. Instead, patients are treated with a combination of proton-pump inhibitors, elimination diets, and steroids with recurrent endoscopies to determine whether and how well treatment is working.

Given that the current management strategy often takes significant time to reduce symptoms, researchers at Children’s Hospital of Philadelphia (CHOP) sought to develop a simple test that could pinpoint foods that cause EoE early in the course of disease so that those foods could be eliminated. To do so, they used EoE milk allergy as a proxy, and looked for immune signatures that would identify EoE milk allergy when compared to controls. 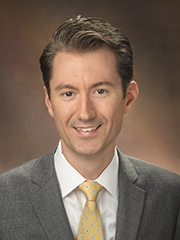 David A. Hill, MD, PhD This finding, if applied to a regularly used assay, could help determine not only what foods an individual should avoid, but also guide timing on reintroducing causal foods, since emerging evidence shows that some children can outgrow EoE after long periods of food avoidance. The test would involve a simple blood draw and could yield accurate results quickly.

“This study outlines a minimally-invasive assay that accurately predicts clinical EoE milk allergy with high sensitivity and specificity,” said senior author David A. Hill, MD, PhD, an attending physician with the Division of Allergy and Immunology at CHOP. “Future studies should determine whether similar assays could apply to other foods that cause EoE, which would allow for easy and accurate diagnosis and more effective treatment of this condition.”

Learn more about the findings of this study, which was recently published in Allergy, here.