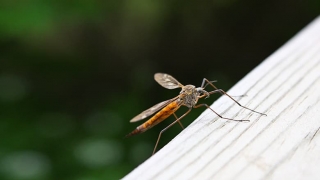 The lifecycle of malaria parasites involves something of a temperature roller coaster. First the Plasmodium falciparum parasite lives within a mosquito, which, as a cold-blooded creature, has a body temperature that mimics that of its environment. Once the mosquito infects a human, the parasite then finds itself living in a much warmer temperature of about 98.6 degrees Fahrenheit. This infection triggers a cycle of high, spiking fevers in humans – reaching heights of 104 F or more – that the parasite survives. When the patient is bitten by another mosquito, the parasite finds itself once again in a cold-blooded insect host.

The ability to withstand such large temperature shifts allows the malaria parasite to wreak havoc on the human body – but, conversely, disabling its ability to do so could provide a roadmap to new antimalarial drugs.

Researchers at Children’s Hospital of Philadelphia (CHOP) have identified a heat-shock protein in Plasmodium falciparum that helps the parasite weather temperature shifts but requires the addition of a lipid – essentially a grease molecule – through a process called prenylation. Without being prenylated, the heat-shock protein cannot function properly, which means the parasite is susceptible to temperature shifts and treatment.

“The rise of antimalarial resistance threatens malaria control efforts worldwide, which is why there is a huge need for new antimalarial drugs,” said Audrey R. Odom John, MD, PhD, Chief of the Division of Pediatric Infectious Diseases at CHOP and senior author of the paper describing the findings. “Several drugs in development already target this prenylation process and kill malaria parasites in the test tube. Our study suggests that these new treatments may be even more effective when given to people with malarial fevers.”

Learn more about this study, which was published in mBio.