CHOP scientists contributed to a large genetic study called the Resilience Project—a search for individuals who are protected from their own gene mutations that otherwise cause severe childhood-onset diseases. The research raises the possibility that further studies may pinpoint specific DNA changes that will offer clues to future treatments. 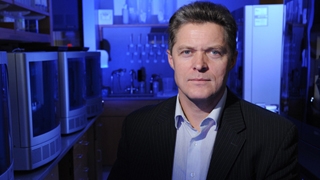 “What makes this study unique is that, unlike most research in human genetics, it didn’t focus on detecting disease-causing mutations in patients with disease,” said co-author Hakon Hakonarson, MD, PhD, director of CHOP’s Center for Applied Genomics. “Instead, the research team detected healthy individuals who did not develop disease symptoms despite having mutations that were previously predicted to always cause severe effects.”

The study was published April 11 in Nature Biotechnology, led by Dr. Stephen Friend of Sage Bionetworks. Among the co-authors were scientists from four countries. CHOP contributed DNA data genotyped from 96,000 subjects, the second largest cohort among the 12 cohorts whose genomes were screened.

The study team analyzed genomes from almost 600,000 individuals across 12 worldwide genetic studies, screening for mutations in 874 genes believed to cause 584 severe childhood disorders. From that mass of data, they discovered that 13 individuals dodged a genetic bullet. Despite harboring mutations for one of eight severe conditions, those 13 people had no signs of the expected disease.

The researchers do not know which other gene variants may be protecting the 13 individuals in their study. Additionally, because of limits under which their DNA was originally collected, the resilient people remain unknown to the researchers and are unable to be contacted.

One implication of the study, said Hakonarson, is that genetic modifiers—in this case, gene variants that shield people from genetic diseases—may be more common than previously thought. Future studies, by building in consent to recontact research subjects, may allow scientists to identify resilient individuals, and perhaps identify protective gene variants that suggest new strategies to prevent or treat some of these diseases.