Neuroblastoma cells respond differently to inflammatory stimuli depending on their cell type and vary in their visibility to the immune system, according to a new study led by researchers at Children’s Hospital of Philadelphia (CHOP) and the Ludwig Institute for Cancer Research. The findings, which were published in the Proceedings of the National Academy of Sciences, suggest that tumor cells in the mesenchymal state might be more visible to the immune system due to increased inflammatory sensing and signaling and, though resistant to chemotherapy, could be suitable targets for immunotherapy.

Neuroblastoma is an aggressive pediatric cancer that is treated with chemotherapy, surgery, and radiation therapy, but patients often relapse with forms of the disease that are chemotherapy resistant. Recently, research has shown that neuroblastoma cells can exist in two different epigenetic states: a less-differentiated mesenchymal state (MES), and a more differentiated adrenergic state (ADRN). In neuroblastoma, most tumor cells are in the ADRN state at the time of diagnosis, but studies have shown tumors might be enriched in chemotherapy-resistant MES cells in relapsed and metastatic disease.

Neuroblastoma has not historically been a candidate for some of the types of immunotherapies that have revolutionized the treatment of some adult tumors, particularly immune checkpoint blockade. This is due in part to a lack of the display to the immune system of tumor-specific targets. The CHOP-led research team hypothesized that increasing inflammatory signaling could enhance that presentation and lead to susceptibility to immunotherapy. To do so, however, they needed to characterize the inflammatory signaling pathways in neuroblastoma cells to understand the fundamental inflammatory state of the tumor and suggest potential avenues to alter that state. 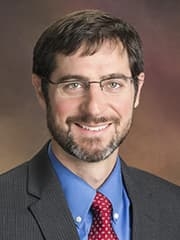 “Our data suggest that immune-directed therapies, particularly harnessing T cells, may be able to exploit the elevated basal inflammatory signaling and sensing of the mesenchymal state,” said first author Adam J. Wolpaw, MD, PhD, an attending physician in the Cancer Center at Children's Hospital of Philadelphia and postdoctoral fellow in the lab of senior author and Ludwig Scientific Director Chi Van Dang. “Given the distinct transcriptional and regulatory networks of MES and ADRN cells and the resistance of the MES state to chemotherapy, it is likely that curing neuroblastoma will require simultaneous targeting of both states with separate, but perhaps synergistic, therapies.”

Learn more about this researcher here.