Every summer, Catherine Hamilton, BSN, RN, an inpatient nurse on the 7 West unit at Children’s Hospital of Philadelphia, packs her bug spray and sunblock and heads to Dragonfly Forest, an overnight summer camp in the Poconos for kids with special medical needs. CHOP has supported camp at Dragonfly Forest since 2010.

Hamilton looks forward to volunteering as a clinician for the hematology week, which is a special camp experience for children with sickle cell disease and hemophilia.

“I love it,” she says, “because we get to see kids outdoors, being healthy, doing everything any other kid would do at an overnight camp. I appreciate the children as children — not as patients. I’m in awe of them.”


Hematology week is one of five camp weeks at Dragonfly Forest. Other sessions are set aside for kids with persistent asthma, autism and 22q deletion syndrome. And one week is designed to help teens transition to adulthood.

Every day of each week, a minimum of one physician and three nurses — plus respiratory therapists for the asthma week — are needed to staff the “Getaway,” aka the infirmary. “But we aren’t stuck in there,” Hamilton says. “We go with the kids for their activities, participate in the talent show, immerse ourselves in the fun.”

She has fond memories of taking a young boy with sickle cell on his first canoe ride across the lake and watching a teen with hemophilia disease zip lining. “These are things they’ve never done before, but with extra precautions, we made it happen,” she says. “It’s wonderful to experience it with them.”

Instead of being the “different” kid, at Dragonfly Forest, the kids are just like everyone else. “Everyone understands what they go through,” Hamilton says. “For once, they’re in the majority.” 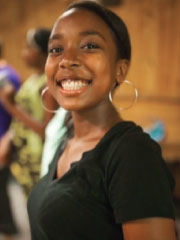 Caylin is all smiles during the hematology week at Dragonfly Forest. Caylin Bolden, now a teenager and a camper for many years, looks forward to camp every summer so she can reconnect with other kids with sickle cell disease she's become friends with over the years.

“I’ve met so many people at camp, and it’s really great to see my friends each year,” she says. “There, people understand you. It’s not like at my school, where not many kids know about sickle cell disease.”

It was hard for Caylin to pick her favorite part of Dragonfly Forest, “because everything is so much fun. If I have to pick, I’d say the lake and beach. There are canoes and hammocks. It’s really pretty there.”

Knowing that CHOP staff are on hand, taking care of medical needs as they arise, “gives parents peace of mind,” Hamilton says.

That was certainly the case for Melissa Bolden, Caylin’s mom. “The first year I was nervous,” Melissa says, “but I trusted other parents who told me, ‘Send her. She’ll be fine, and you’ll be happy.’ She hasn’t missed a year since. She loves it so much we had to change our vacation week so she could still go to camp.”

“There’s something magical about being there,” Hamilton says.