Researchers compared the two methods in a large, multicenter trial led by Children’s Hospital of Philadelphia (CHOP). The findings were published in the March 26, 2019, edition of the Journal of the American Medical Association.

Studies comparing the two methods have been limited thus far. Pooled data from smaller randomized trials were conflicting: One showed that sustained inflations reduced the need for mechanical ventilation however, another found no benefit in mortality. In infants younger than 30 weeks’ gestational age, sustained inflations are commonly used in delivery rooms in Europe but not in the United States. 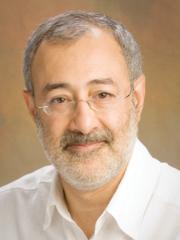 Haresh Kirpalani, MD “Preterm infants with weak respiratory muscles and liquid-filled lungs struggle to aerate their lungs, leaving them at risk of complications, including bronchopulmonary dysplasia (BPD), which is associated with a lot of long-term problems,” said Haresh Kirpalani, MD, MSc, neonatologist at Children’s Hospital of Philadelphia and the study’s lead author. “We hypothesized that establishing adequate lung volume quickly in these infants could reduce the risk of BPD. This was possible using sustained inflations at delivery, as these appeared beneficial in animal models, and in smaller prior human studies. However, in our larger randomized trial, in the smallest and most vulnerable preterm infants, this proved not to be the case.”

The randomized trial was conducted from August 2014 to September 2017, in 18 neonatal intensive care units in nine countries. Preterm infants from 23 to 26 weeks’ gestational age requiring resuscitation with inadequate respiratory effort or bradycardia were enrolled. The primary outcome was the rate of BPD or death at 36 weeks’ postmenstrual age. There were 27 prespecified secondary efficacy outcomes and seven safety outcomes, including death at less than 48 hours.

“Because we had been worried about complications, the external data safety monitoring board was looking for early adverse events. Unfortunately, this promising therapy seemed to have higher mortality, especially in the smallest, most vulnerable infants,” added Kirpalani. “Additional research is needed to address how best to treat these infants at delivery, to reduce their risk of extreme side effects of a very early birth.”