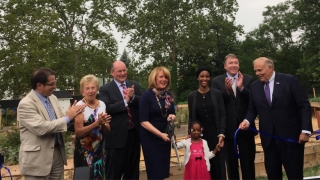 On Thursday, July 28, 2016, credit unions and Children’s Hospital of Philadelphia joined with RealClearPolitics to open a Health and Wellness Garden at the Nicholas and Athena Karabots Pediatric Care Center in West Philadelphia. The ribbon cutting marked an end to the construction that credit unions funded earlier this spring to create a garden in honor of the 2016 Democratic National Convention (DNC), taking place in Philadelphia.

The Health and Wellness Garden, created in partnership with America’s Credit Unions and Credit Unions for Kids, will serve as a resource for vitally important patient and community engagement programs that aim to support education and hands-on activities around gardening and healthy nutrition. A construction kick-off and multiple volunteer days took place earlier this year to help transform an open space into a garden.

With the help of hundreds of volunteers, the Health and Wellness Garden has about 1,200 feet of raised beds with plants, including squash, kale, cucumbers and sweet peppers; herbs, including rosemary, oregano, lavender and basil; eggplant, sweet potatoes, purple sweet potatoes and multiple varieties of lettuces and tomatoes. Volunteers also planted a fruit tree orchid in the garden, which will produce apples and other delicious fruits. Much of the produce from the garden will be donated to Early Heard Start, a program that serves families with children 3 years of age and under, in two specific zip codes of Philadelphia that are at or below the federal poverty line.

The Credit Union National Association (CUNA) and RealClearPolitics honored the Democratic National Convention by taking on the project. The effort represents a tradition of credit unions honoring cities that host the national party conventions with “leave-behind” projects, which serve the local communities long after the conventions have left town. A similar project was built for the children’s hospital in Cleveland, host of the Republican National Convention.

The Hon. Edward G. Rendell, former Governor of Pennsylvania and Chair of the Philadelphia 2016 Host Committee for the Democratic National Convention, cut the ribbon with the help of Karabots patient Amari Pinckney and her mother, Nahree Anderson.

Representatives from CUNA, the Pennsylvania Credit Union Association, CHOP’s Nicholas and Athena Karabots Pediatric Care Center and RealClearPolitics, along with special guests, were on hand for the event and discussed the importance of the garden.

“I am thrilled to cut the ribbon on the Health and Wellness Garden at our Nicholas and Athena Karabots Pediatric Care Center,” said Madeline Bell, president and CEO of The Children’s Hospital of Philadelphia. “Today’s event celebrates the generosity of the Pennsylvania Credit Union Association and our local credit unions — and countless hours of work by their volunteers who helped build the garden. We are so fortunate to be able to share it with our community and promote good nutrition for years to come.”

“Credit unions have been proudly conducting leave-behind projects in honor of the National Party Conventions since 2000 to leave a lasting impression on the communities like Philadelphia that have opened their doors to national nominating conventions,”said Rich Meade, Chief of Staff and COO of CUNA. “This meaningful work, bringing a health and wellness garden to a community in need, will continue to serve its purpose and impact the lives of children and their families for years to come.”

“Each presidential election cycle, we ask a great deal of the communities with which we partner to host our wonderful and vibrant, but resource-consuming Democratic National Conventions,” said Edward G. Rendell, former Governor of Pennsylvania and Chair of the Philadelphia 2016 Host Committee for the Democratic National Convention. “It is the least we can do to erect a meaningful and tangible ‘thank you’ by building projects such as these; projects that will continue to support their communities long after the conventions leave town. Because of a partnership between the Democratic National Convention Committee, the Credit Union National Association, the Pennsylvania Credit Union Association, RealClearPolitics, and, of course, The Children’s Hospital of Philadelphia, this community will forever have a resource that will both augment patient care and enrich the lives of community members. This garden is a symbol of our appreciation. Together we say thank you.”

“RealClearPolitics is proud to be part of a project that will make such an impact within the Philadelphia community for years to come,” said Carl Cannon, Washington Bureau Chief of RealClearPolitics.

“This project embodies the credit union philosophy of people-helping-people,” said Patrick Conway, president and CEO of PCUA. “Rather than holding a big party or event, credit unions have chosen to fund this Health and Wellness Garden that will have a positive impact in this community for many years to come.”

The Pennsylvania Credit Union Association spearheaded fundraising by credit unions and raised more than its target goal of $300,000, the amount needed to cover the costs of the project.

CUNA, credit unions in Ohio and RealClearPolitics also worked with the RNC on a companion project and hosted a ribbon cutting for a horticultural therapy suite at UH Rainbow Babies & Children’s Hospital in Cleveland last week.

The Children’s Hospital of Philadelphia was founded in 1855 as the nation’s first pediatric hospital. Through its long-standing commitment to providing exceptional patient care, training new generations of pediatric healthcare professionals and pioneering major research initiatives, Children’s Hospital has fostered many discoveries that have benefited children worldwide. Its pediatric research program is among the largest in the country. In addition, its unique family-centered care and public service programs have brought the 535-bed hospital recognition as a leading advocate for children and adolescents. For more information, visit http://www.chop.edu.

RealClearPolitics is the trusted, non-partisan, convener in a content-rich media environment; thoughtfully curating the best coverage from every angle of the day's most critical issues. One of RCP’s most notable features — the RCP Poll Average — is the most cited source for U.S. political polling information. The RCP Poll Average provides a more accurate read on the status of the election. The accuracy of the RCP Poll Average is unmatched and trusted enough to be used in campaign communication documents, as well as being widely cited by hundreds of news organizations, including: The Wall Street Journal, New York Times, Financial Times, FOX News, CNN and USA Today. With a wide array of news and analysis available online, insiders rely on RealClearPolitics as the authoritative source for reporting, commentary, and analysis on all sides of the pressing public policy issues coming to the fore in 2016 — and the politics surrounding those issues heading into, and beyond, the election cycle.