Critically ill infants and children do not gain extra benefit from control of their blood sugar level to lower levels, compared to higher levels within the usual care range, say researchers who led a national clinical trial. While both levels of blood sugar control were relatively safe, control to lower levels increased the risk of a very low blood sugar (hypoglycemia) without offering a significant advantage. 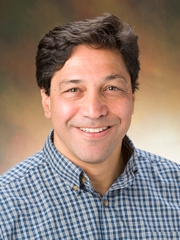 The co-principal investigator and lead author of the study is Michael S.D. Agus, MD, a critical care specialist and endocrinologist at Boston Children’s Hospital. Agus reiterated the value of the trial by pointing out that “we successfully enrolled the sickest children in ICUs across North America and were able to answer an important clinical question using the latest technology in order to mitigate risk, and arrive at a result that informs clinical practice.”

The HALF-PINT study (for Heart and Lung Failure Pediatric INsulin Titration Trial) was sponsored by the National Institutes of Health, and the results appear today in the New England Journal of Medicine (NEJM), concurrent with a presentation in the late-breaking science session at the annual meeting of the Society for Critical Care Medicine in Honolulu.

The study team enrolled 713 critically ill children ranging from 2 weeks old to age 17 years, from 35 pediatric centers. All the children had hyperglycemia (high blood glucose levels), but unlike previous multicenter trials, none were cardiac surgery patients. The children were randomized into two groups. In one group, clinicians aimed for lower glucose control targets—80 to 110 milligrams per deciliter, while the other group had a higher target—150 to 180 mg per deciliter. The primary outcome was ICU-free days up to day 28 (mortality adjusted-length of ICU stay).

The HALF-PINT trial is a landmark study that pushes back against tight glycemic control medical practice in the wake of paradigm-shifting critical care studies over the past two decades. Two 2002 studies in adult medicine reported lower morbidity and mortality for adult intensive care unit (ICU) patients who had tight glycemic control (80 to 110 mg per deciliter). Those results shifted care toward greater restrictions, but subsequent multicenter adult trials found no difference between lower and higher target ranges.

The HALF-PINT trial focused on critically ill children without cardiac surgical conditions, an understudied population. Between the two treatment groups, there were no significant differences in ICU-free days, mortality, organ dysfunction, or ventilator-free days.

“As the latest large pediatric trial to find no significant difference, the HALF-PINT study represents a third strike against glucose control to a target of 80 to 110 mg/dL,” said Nadkarni. In addition to providing no significant clinical outcome benefit, achieving lower target ranges within usual care increased the patients’ risk of hypoglyemia—abnormally low blood sugar.

The Data and Safety Monitoring Board halted the HALF-PINT trial early, when they determined that continuing the study was highly unlikely to offer different results. Nadkarni added that follow-up research will continue with study patients, to evaluate survival and neurological outcomes a year after treatment.

Nadkarni and co-workers at CHOP, including Dr. Alexis Topjian, participated in another multicenter pediatric clinical trial presented at the SCCM late-breaking research session and published in the same issue of NEJM. The THAPCA (Therapeutic Hypothermia After Pediatric Cardiac Arrest) in-hospital study compared two levels of targeted temperature management in children who survived in-hospital cardiac arrests. The group found that targeting lower body temperature to 33 degrees Celsius (91 degrees Fahrenheit) had no benefit in survival with favorable functional outcome at one year, compared to targeted temperature management to 36.8 degrees Celsius (98 degrees Fahrenheit) for five days. This study, which included 329 children from 37 pediatric hospitals, was co-led by principal investigators from the University of Michigan and the University of Utah.

The HALF-PINT trial was funded by the National Heart, Lung, and Blood Institute of the National Institutes of Health (grants HL107681 and HL108028).