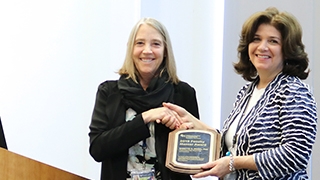 The first few years of a scientist’s career are a critical time when they begin to understand so many key aspects of conducting important research and understanding how to potentially run their own lab someday. Scientists are motivated by their own drive to find answers to difficult questions, but it takes an exceptional mentor to help these young researchers navigate their critical early years in the field.

Each year, CHOP’s Scientific Symposium pays respect to one such mentor, chosen by the mentees. This year, the Faculty Mentor Award went to Babette Zemel, PhD, research professor in the Division of Gastroenterology, Hepatology and Nutrition at Children’s Hospital of Philadelphia (CHOP). This special honor is given to faculty investigators whose mentoring has helped their colleagues become the next generation of brilliant researchers at CHOP.

“The letters we received nominating Bab for this award were phenomenal,” said Beverly L. Davidson, PhD, Chief Science Strategy Officer at CHOP, during the welcome remarks at the symposium, held on May 22 in the Colket Translational Research Building.

Zemel is internationally renowned for her work on child growth, with some of her studies from her multi-decade career at CHOP yielding new and important findings years after their completion.

Shana E. McCormack, MD, an attending physician and Scientific Director of the Neuroendocrine Center in the Division of Endocrinology and Diabetes and one of Zemel’s mentees, spoke about how valuable her constructive criticism of their work was, prompting young scientists to strive to do better rather than become discouraged. She also remarked on how Zemel made sure scientists understood the importance of work-life balance.

“She understands that we’re at our best when we bring our whole selves to work,” McCormack said.

Many scientists have published, started their own labs, and begun mentoring their own young scientists as a result of the impact Zemel had on them. She graciously accepted her award and stressed how important it is to maintain an emphasis on mentorship.

“We need really good mentors and a focus on mentorship to train the next generation of scientists and keep the legacy we have established here at CHOP going,” Zemel said.