CHOP Scientist’s Findings May Lead to Prevention of Spinal Deformity 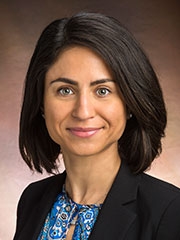 Saba Pasha, PhD A pediatric researcher has identified patterns of spinal curvature in younger children that may be likely to develop into scoliosis by adolescence. Accurately predicting scoliosis, a common, abnormal curvature of the spine, may set the stage for the first-ever methods to prevent the potentially disabling condition.

“This was the first study to quantitatively explain how variation in spinal patterns may lead to the spinal deformities seen in scoliosis, and may eventually guide us to early interventions for children at risk,” said researcher Saba Pasha, PhD, director of Orthopaedic Engineering and 3D Musculoskeletal Imaging at Children’s Hospital of Philadelphia. Her study appeared online Nov. 11 in Nature Scientific Reports.

Pediatric scoliosis is the most common spinal deformity worldwide, occurring over a range of severity in up to 4 percent of children. Although it may be caused by specific diseases, most adolescent scoliosis is idiopathic—the cause remains unknown. Researchers have found evidence of genetic influences, but the underlying mechanisms of the spinal instability in scoliosis are poorly understood.

In the current study, Pasha used computer simulations to investigate how elastic rods, modeling children’s spines, change shape in response to mechanical loading. She borrowed the concept from other researchers who simulate how DNA molecules and proteins change their structure in response to a variety of factors.

Pasha drew on spinal X-rays of 129 adolescents with or without scoliosis. Computer analysis transformed those images into 2-dimensional (2-D) patterns, designated sagittal spinal profiles. She used those patterns to create S-shaped elastic rods in the computer simulation and applied simulated mechanical forces to observe how those rods deformed in 3-dimensional (3-D) shapes. The results were intriguing.

Under this simulated mechanical force, S-shaped 2-D patterns in the model deformed into the 3-D patterns seen in scoliosis patients with the same sagittal curve. However, the rods in the model that represented the sagittal curves of patients without scoliosis did not twist into a 3-D scoliosis-like deformation. This model provides strong evidence, said Pasha, that the shape of a person’s sagittal profile can be a leading cause of scoliosis.

Much research remains to be done, said Pasha, to determine whether the spinal shapes seen in images from younger patients can be developed into a risk-assessment tool to predict whether a 10-year-old is likely to develop scoliosis during their teenage years.

However, if follow-up studies verify that imaging studies can identify patients at risk for later scoliosis, these studies may allow clinicians to develop strategies to prevent a condition for which no preventive measures now exist. The current treatment for patients with severe scoliosis is to custom design a rigid spinal brace, with surgery as another option at a young age. It may be possible, said Pasha, that wearing a brace at a younger age may prevent scoliosis from developing.

In addition to her CHOP position, Pasha is on the faculty of the Perelman School of Medicine at the University of Pennsylvania.

About Children’s Hospital of Philadelphia: Children’s Hospital of Philadelphia was founded in 1855 as the nation’s first pediatric hospital. Through its long-standing commitment to providing exceptional patient care, training new generations of pediatric healthcare professionals, and pioneering major research initiatives, Children’s Hospital has fostered many discoveries that have benefited children worldwide.  Its pediatric research program is among the largest in the country.  In addition, its unique family-centered care and public service programs have brought the 564-bed hospital recognition as a leading advocate for children and adolescents.