This month, both the U.S. House and Senate approved legislation to reauthorize the Emergency Medical Services for Children (EMSC) Program through 2019. S. 2154 was introduced by Sens. Bob Casey (D-PA) and Orrin Hatch (R-UT), and H.R. 4290 was introduced by U.S. Reps. Jim Matheson (D-UT) and Pete King (R-NY). The legislation now awaits a signature by President Barack Obama which would make it law.

The Act provides Congress with the authority to fund activities intended to reduce child morbidity and mortality by improving emergency medical services for children. Those activities are supported by grants administered by the Health Resources and Services Administration.  Specifically, the bill would permit Congress to spend up to $30 million in 2015 (up from $20 million in 2014) and $152 million over the 2015-2019 time period (CBO analysis). 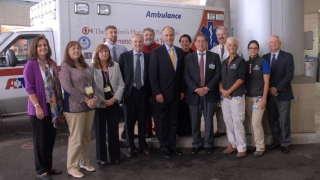 If enacted, CHOP looks forward to even more advancements in pediatric emergency care.