In April 2020, pediatricians began recognizing a puzzling syndrome in children involving hyperinflammation that results in an array of symptoms, including fever, gastrointestinal distress and rash. The syndrome, thought to be a post-infectious complication of SARS-CoV-2 infection, was given the name multi-system inflammatory syndrome in children, or MIS-C. However, diagnosing the condition has posed challenges, as many of its symptoms, including rash, are common in many other pediatric infections.

In a study published in Open Forum Infectious Diseases, researchers at Children’s Hospital of Philadelphia (CHOP) describe the array of rashes seen in MIS-C patients at their hospital through late July 2020, providing photos and information that could help doctors diagnose future cases.

“We hope the information provided in this research letter will help general pediatricians and emergency department physicians who may wonder if a patient with a fever requires a more extensive examination,” said Audrey Odom John, MD, PhD, Chief of the Division of Pediatric Infectious Diseases at CHOP and senior author of the paper. “Given that some rashes associated with MIS-C are distinctive, we also imagine these images could help many parents who are looking for signs that their child needs prompt evaluation.”

The research team analyzed the MIS-C-associated rashes of seven patients seen at CHOP. Although the researchers did not observe a single, defining rash associated with COVID-19, there were several types of rashes that were common in these patients, both in appearance and location. 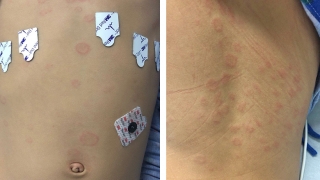 While some patients did develop a cherry-red rash on the bottoms of their feet and palms of their hands, this sort of rash was seen in less than half of the patients in the study. Rashes on the face were uncommon, and the rashes rarely itched. 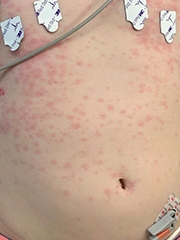 Rash on torso of a patient with MIS-C “Depending on the age of the child, parents may not regularly look at the child’s chest, back or thighs, but this is where the rashes associated with MIS-C tend to appear,” said John. “Given that MIS-C is still largely a diagnosis of exclusion, parents and health care providers should look for rashes in these locations if the child has a fever that seems suspicious.”

What Parents Need to Know about MIS-C

Learn about the newly discovered multi-system inflammatory syndrome in children (MIS-C), including symptoms, causes, treatment and research at CHOP.

How to Protect Your Family from COVID-19

Learn infection prevention strategies, what to do in case of exposure, and what to do if you or a family member are sick. 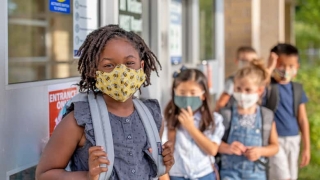 Help your children cope with these helpful tips.