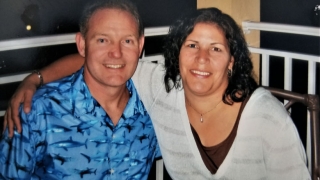 Bob and Martha Edmunds In the early 1990s, when Martha and Bob Edmunds’ son Billy was a toddler, he was experiencing up to 20 bouts of diarrhea a day. “It was heartbreaking,” Bob Edmunds recalls. But the help they found at Children’s Hospital of Philadelphia (CHOP) inspired the Edmunds family, and they’ve been generous CHOP donors since 1998.

A gastroenterologist in the family’s hometown of Atlantic City, NJ, diagnosed Billy with inflammatory bowel disease (IBD) — an autoimmune disease with no cure — and suggested they go to CHOP. “People at that time had very little knowledge of what IBD was,” says Edmunds. But at CHOP, the family met Robert Baldassano, MD, Director of the Center for Pediatric Inflammatory Bowel Disease, who became their son’s treating physician until Billy was an adult. “We can’t say enough good things about Bob Baldassano and the whole GI crew,” says Edmunds.

At the time, steroids were the primary treatment option for IBD, and the side effects were noticeable, particularly in stunting Billy’s growth. He still played sports, including basketball, football and baseball, but IBD flare-ups would regularly interrupt his life.

When Billy was in his early teens, Baldassano suggested trying a newly available treatment, which has become one of the most common ways to manage IBD symptoms: infusions of a synthetic antibody. “I saw the change it made in my son,” says Edmunds. “He became more confident and was able to get into better shape.” Edmunds had a realization: “Everyone wants to find a cure, but even finding medications with minimal side effects that create a good quality of life, especially for children — that’s what I want to support.”

For more than 20 years, the Edmunds family has made significant gifts to a fund they created and named, the Edmunds Fund. The gifts support research at CHOP’s Center for Pediatric IBD, one of the largest centers of its kind in the nation. In 2017, the IBD Center was designated as one of CHOP’s Frontier Programs, a select group known for their innovative ideas, their remarkable accomplishments, and their unrelenting belief that a better way is possible.

The IBD Center’s scientists are improving genetic testing, exploring the role of the trillions of organisms inside us known as the microbiome, and using the expanding knowledge to explore entirely new treatment options — work that is all made possible because of remarkable donors like Martha and Bob Edmunds.

The Edmunds family is among the many donors to CHOP’s $1 billion fundraising campaign For Tomorrow’s Breakthroughs. Donations fund care, research, training, outreach programs and resources to act quickly. To learn more about making a gift to CHOP, visit chop.edu/giving.