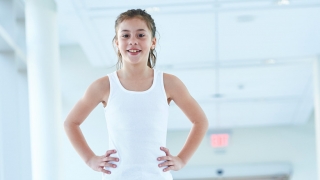 Scoliosis, the medical term for curvature of the spine, affects millions of people, an estimated 2 to 3 percent of the population. The most common form is idiopathic scoliosis (in which the cause is unknown), and it most commonly occurs between the ages of 10 and 18. Girls are much more likely than boys to require treatment.

The severity of scoliosis and the need for treatment is determined by the angle at which the spine is out of normal alignment. Milder cases generally require no treatment.

Great progress has been made in recent years in treatment for that middle range of scoliosis to stop the progression and avoid the need for surgery. Jennifer Winell, MD, an attending surgeon at Children's Hospital of Philadelphia (CHOP) who specializes in non-surgical scoliosis treatment, explains. “Braces hadn’t changed much in 20 or 30 years. Some of us in the field began to look for innovative alternatives. Medicine is advancing and we thought there might be new ways to treat scoliosis.”

Dr. Winell’s research did find two significant advances, and these are now options for treatment at CHOP. Used in combination, they hold great promise for stopping the progression of scoliosis before it gets severe enough to require surgery.

The first is a new type of brace, developed by a physician in Spain. The brace is lighter than traditional scoliosis braces. It is made of thinner material, so it doesn’t get as hot. It attaches in front, not in back, so it’s easier to put on and take off. And, most importantly, it provides three-dimensional correction, where traditional braces only provided side-to-side pressure.

The second element in treatment is a new type of physical therapy, called Schroth exercises, developed in Germany and refined over time by therapists around the world. The exercises are tailored to the specific spinal curvature problems of each patient, and work on posture, strength, breathing, the functions of daily life and self-image.

“The combination of improvements makes the brace more appealing to patients and more effective,” says Dr. Winell. “When combined with the Schroth exercises, kids feel more active in their own care. And when they feel involved, they do a better job of sticking with the treatment. That makes a huge difference in the outcomes. I’m seeing it in my practice. We’ve been offering this for a year now, so it’s too early to have definitive data. But when kids come in after their first couple of months with the brace and the therapy, I’m seeing real progress.”

Because there’s a genetic component to scoliosis, some parents of young patients have experience themselves with older treatments. Their own discomfort with earlier braces may make some hesitant about seeking treatment for their children. Parents and patients should know that recent advances in non-surgical scoliosis treatment have made them more comfortable, more engaging and more effective.