The natural history of hip subluxation in patients with cerebral palsy with a migration percentage (percent of the diameter of the femoral head no longer covered by the lateral margin of the acetabulum) of > 30% is continued displacement and, ultimately, dislocation. Dislocation in this population has known deleterious effects on quality of life, including difficulty with seating, problems with hygiene and positioning, and pain. The risk of hip displacement goes up with increased Gross Motor Function Classification System (GMFCS) levels, and is particularly high in our non-ambulatory, GMFCS IV and V patients. Furthermore, once the hip is dislocated, it is also associated with increased surgical complexity and less reliable outcomes to reconstruct or salvage the hip. 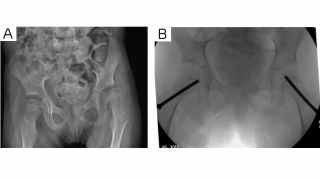 Figure 1: A. Preoperative and B. Intraoperative images of proximal femoral guided growth procedure for hip displacement 30-50% The importance of intervening early is highlighted by the novel techniques available to prevent or delay dislocation when early displacement is identified. The evolving technology of proximal femoral guided growth (see Figure 1), combined with soft tissue releases, has very promising results in postponing or even averting continued hip displacement, possibly mitigating or temporizing the need for bony reconstruction.

This is a percutaneous procedure where screws are inserted to tether the growth plate of the proximal femur, inducing it to grow into varus and aim itself back into the socket. In a healthy child, this can be a day procedure with immediate return to full weightbearing and physical activity. Although exact indications are still being elucidated, this procedure seems most beneficial in young patients (< 6 years old) with mild subluxation (< 50% migration percentage), making early detection imperative for candidacy. 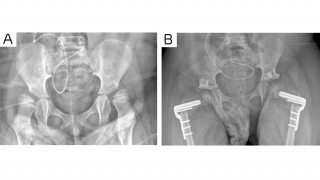 Figure 2: A. Pre-op and B. Post-op images of a 7-YO with bilateral varus derotational osteotomies, bilateral pelvic osteotomies, and bilateral adductor lengthenings In children with insufficient growth remaining, with a migration percentage > 50%, with a frank dislocation, or who have progressed despite more minimal interventions, hip reconstruction with a la carte interventions to relocate the femoral head into the acetabulum can be performed. This may include varus derotational osteotomy, open reduction, soft tissue releases, pelvic osteotomy, and possible spica casting as indicated by the patient’s specific anatomy (see Figure 2).

While this can prevent the known negative sequelae of allowing the hip to become chronically dislocated, it is a painful, involved procedure with more associated perioperative risk, and it requires significant rehabilitation. There is also a risk of recurrent subluxation in younger patients, who may end up requiring revision surgery, which is why the option of a less invasive approach to avoid or delay reconstruction is so auspicious. 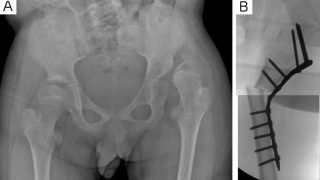 Figure 3: A. Preoperative B. Intraoperative Chronic or missed dislocations in older patients may cause the femoral head to be misshapen, making it likely to be painful and arthritic if relocated. In the setting of a non-reconstructible hip, the only option is a salvage procedure, such as a femoral head resection, pelvic support osteotomy (see Figure 3), or constrained total hip arthroplasty. However, while often helpful for pain relief, these often have far less predictable results and functionality. 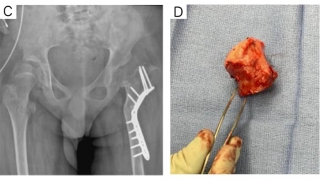 Figure 3: C. Postoperative radiographs of an adolescent patient with a chronic painful hip dislocation who underwent a femoral head resection and pelvic support osteotomy. D. Resected femoral head with non-spherical, traingular shape and arthritic changes Given the increased surgical complexity as well as poorer expected outcomes of late-presenting displacement, we can understand the importance of hip screening in our neuromuscular patients. There is ample literature to support that screening decreases the number of hips that go on to full dislocation because they are identified and addressed early, decreasing the operative morbidity and improving functional outcomes4.

With the above in mind, the American Academy for Cerebral Palsy and Developmental Medicine has published guidelines on its website on when to screen patients (clinically and/or radiographically, based on their age and Gross Motor Function Classification Scale level. This and a number of other guidelines are incorporated into the HipScreen App, a helpful tool from Shriner’s Hospital for Children for practitioners seeing these patients to know when to perform and how to interpret hip surveillance X-rays.

At CHOP, when a diagnosis of CP is entered and the GMFCS level selected in the EMR, corresponding prompts for surveillance imaging come up in the electronic medical record to ensure timely and appropriate screening. With efforts such as these, and with the work of our fantastic multidisciplinary team in the Cerebral Palsy Program helping us achieve timely identification of hips at risk, we hope to intervene early, when indicated, to keep our patients pain-free and functional, with the highest quality of life possible.

Elkamil AI, et al. Prevalence of hip dislocation among children with cerebral palsy in regions with and without a surveillance programme: a cross sectional study in Sweden and Norway. BMC Musculoskelet Disord. 2011;12:284.

Intersection of Neuromuscular and Deformity Surgery for Ambulatory CP

The secondary impairments in cerebral palsy lead to loss of function, pain, and more. This is where the orthopedic surgeon can intervene to help.