Children who undergo surgery for congenital heart disease have lower survival rates by 3 years of age if there are specific problems during fetal development, such as hypertension in the mother or the newborn being born preterm or small for gestational age. These problems are considered markers of an impaired maternal-fetal environment (MFE). 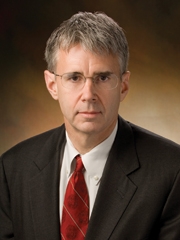 J. William Gaynor, MD “We already knew that an impaired maternal-fetal environment correlates with neonatal mortality and morbidity in children who don’t have heart disease,” said study leader J. William Gaynor, MD, a pediatric cardiologist at Children’s Hospital of Philadelphia (CHOP). “In this study, we investigated the impact of those impairments on child outcomes after infant heart surgery.”

Gaynor and colleagues published their study online Feb. 13 in the European Journal of Cardio-Thoracic Surgery.

The researchers performed a retrospective analysis of 135 newborns with congenital heart disease (CHD) from a larger study of neurodevelopment outcomes after infant cardiac surgery. Two thirds of the cohort of 135 infants had transposition of the great arteries or hypoplastic left heart syndrome (HLHS). The study team defined an impaired MFE as involving pre-eclampsia in the mother, being small for gestational age, or being born preterm. Pre-eclampsia entails gestational hypertension, plus either protein in the urine or injury to the liver or kidney.

“Evidence is mounting that the MFE and the placenta are abnormal in many fetuses with CHD, with adverse effects on early development,” said Gaynor. Impaired neonatal growth, in turn, may predict worse surgical outcomes. In addition, he added, there is increasing recognition that CHD in a fetus is associated with the mother’s health as well.

The researchers noted that the impact of an impaired MFE may extend for years after the initial surgery — in this study, up to age 3. Further studies, said Gaynor, should investigate the mechanisms driving MFE in fetuses with CHD, and on potential strategies to improve the MFE.

CHOP is particularly well positioned to pursue research into the maternal-fetal environment, because the Hospital houses the Center for Fetal Diagnosis and Treatment (CFDT), one of the world’s largest and most comprehensive fetal therapy centers, and the Fetal Heart Program, a dedicated team of physicians, nurses and imaging specialists focused on fetal cardiovascular conditions. The CFDT also includes the Garbose Family Special Delivery Unit, the first obstetrical delivery unit in a pediatric hospital dedicated to the care and delivery of high-risk fetuses with complex anomalies requiring medical or surgical interventions and care immediately after birth.

Mark P. Johnson, MD, a co-author of the current study and Director of Obstetrical Services in the CFDT, said, “An impaired MFE may result in functional immaturity and abnormal development of multiple organ systems, including the heart. Whether this abnormal development raises the risk of higher infant mortality after heart surgery is a question that merits further investigation.”