An Easier Journey to a GI Diagnosis

Sarah Lustgarten suffers from a severe gastrointestinal motility condition that affects the movement of stomach muscles and restricts her ability to digest food. She’s a young adult with great appreciation for how Children’s Hospital of Philadelphia has over the years helped her navigate the daily challenges of this disorder — and she has her grandparents, Irma and Norman Braman, to thank.

Two generous $5 million gifts from the Bramans during the campaign For Tomorrow’s Breakthroughs launched and then helped expand the Suzi and Scott Lustgarten Center for GI Motility. The Lustgarten Center — named for the Bramans’ daughter Suzi Braman Lustgarten and her husband, Scott — offers the nation’s most comprehensive clinical and research program in pediatric gastrointestinal motility disorders.

The Lustgarten Center has been gamechanging for patients such as 13-year-old Akil. After severe GI symptoms put Akil in a Maryland hospital for weeks, motility experts at CHOP diagnosed him and developed an individualized treatment plan. Besides tending to Akil’s medical needs, the team included a social worker to help his family locate resources and a psychologist to develop a school reintegration plan. 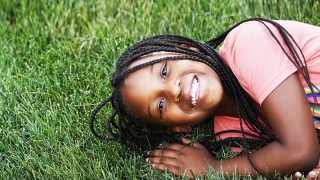 Thanks to the Bramans, the center has been able to significantly grow its staff, including the addition of a second senior scientist with the center’s unique and innovative neurogastroenterology research program.

Additional staff has augmented the strength and scope of the Lustgarten Center and expanded its ability to produce novel research necessary to improve the care of children with motility disorders.

In addition, support from the Suzi and Scott Lustgarten Family Foundation enabled the center to pioneer a new program to better assist young adults, like Sarah, as they move from pediatric to adult care.

“Getting an accurate diagnosis for a GI disorder is a long and challenging process, before doctors even begin to explore the right treatment,” says Norman Braman. “We want to help families through this painful journey and offer children everywhere happier childhoods and healthier futures.”

Held every September for 18 years, the Parkway Run & Walk founded by the Four Seasons Hotel Philadelphia is the largest annual fundraiser for Children’s Hospital of Philadelphia’s Cancer Center, an internationally recognized leader that is ranked the No. 1 pediatric oncology program in the nation by U.S. News & World Report. For the past two years, Citadel Credit Union has served as the event’s presenting sponsor. Citadel is one of the largest credit unions in Pennsylvania, serving thousands of families across Greater Philadelphia and beyond — and every part of their business is driven by the mission of “people helping people.”

The Parkway Run funds many areas of the Cancer Center’s comprehensive care and cutting-edge research, such as the search for specialized treatments for extremely rare cancers, support for survivors who often must deal with the effects of chemotherapy for their entire lives, travel expenses for families who desperately need clinical trials available only at CHOP, and more.

“The Parkway Run embodies everything we are about: moving forward with unity and a commitment to advancing medicine and finding a cure for childhood cancer,” says Stephen Hunger, MD, Chief of the Division of Oncology, Director of the Center for Childhood Cancer Research at CHOP and the Jeffrey E. Perelman Distinguished Chair in the Department of Pediatrics. “Citadel’s community involvement and philanthropy help to fuel tomorrow’s breakthrough therapies.”

As a community-centric nonprofit organization, Citadel focuses on providing value to members and giving back through volunteering and supporting other nonprofits in the area. In addition to sponsoring the Parkway Run, Citadel helps raise funds for CHOP through Citadel Country Spirit USA, a three-day live music festival.

Michael DeLuca knows what it’s like to feel powerless. Decades ago, he lost a cousin to a neurological disorder that was discovered after it triggered a seizure at age 5. His cousin had numerous neurosurgeries at Children’s Hospital of Philadelphia, yet died very young.

This tragic experience was a driving force behind the impact DeLuca makes today. In gratitude for the specialized care his cousin received at CHOP, DeLuca has been giving to the hospital since 2011 to support the Division of Neurology. Through his philanthropy, he honors his cousin’s memory — and propels the work of expert pediatric neurologist and researcher Robert R. Clancy, MD, the Tristram C. Colket, Jr. Endowed Chair in Pediatric Neurology.

Dr. Clancy founded CHOP’s Pediatric Epilepsy Program, where he advances research to prevent chronic epilepsy after an acute brain injury. In close collaboration with colleagues, he also maps how seizures in newborns behave over time with the hope of preventing the onset of epilepsy.

It is important to DeLuca to direct his philanthropy toward a program with the power to touch the lives of patients like his cousin. His support of innovative epilepsy research at CHOP can also transform the careers of neurologists who follow in Dr. Clancy’s footsteps.

DeLuca serves as chair of an import company in Washington state and is President of a Hong Kong company with offices in Shanghai, where he once lived with his wife, Anne, and their three children. While there, he passed along his dedication and compassion to his children: The family volunteered at an orphanage that they continue to support today. Michael and Anne currently live in Honolulu, and they also extend their support to Kapiolani Medical Center for Women and Children.