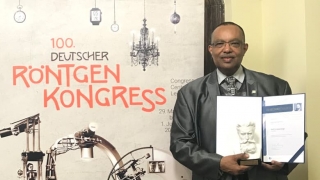 In May 2019, at the annual meeting of the German Radiological Society, Kassa Darge, MD, PhD, Radiologist-in-Chief and Chair of the Department of Radiology at Children’s Hospital of Philadelphia (CHOP), was awarded an “Honorary Membership” in recognition for his longstanding contribution to the development of radiology.

In 1895, Professor Wilhelm Roentgen discovered X-ray while working at the University of Wuerzburg in Germany. This discovery laid the foundation for the specialty of radiology (originally called “roentgenology”). In 1905, the German Radiological Society (Deutsche Roentgengesellschaft) was established, making it one of the oldest societies in the field.

In the 100-plus year history of the German Radiological Society, Dr. Darge’s award marks only the second time that a pediatric radiologist has received this prestigious honor, and the first time in the society’s history that a black radiologist has joined the ranks of Prof. Wilhelm Roentgen on the list of honorary members.