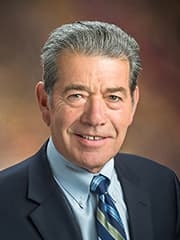 Dr. Lawrence W. Brown Dr. Lawrence W. Brown, a pediatric neurologist at Children’s Hospital of Philadelphia (CHOP), is preparing to retire from the Perelman School of Medicine of the University of Pennsylvania after a long and distinguished career. While he will no longer provide direct patient care, Dr. Brown will remain on the medical staff at CHOP to train the future generations of child neurologists.

Dr. Brown completed residencies in pediatrics and child neurology at CHOP, and he spent his entire career in academic medicine in Philadelphia specializing in epilepsy, behavioral neurology and sleep medicine.

Dr. Brown is a past president of the Child Neurology Foundation, and he recently stepped down as chairman of its Transitions Project Advisory Committee (TPAC). This effort is defining the goals of successful transition for youth with neurologic disorders. Locally he was a co-principal investigator of an epilepsy education and transition project funded by the Health Resources Services Administration (HRSA) in collaboration with the AAP.

Dr. Brown was director of the Pediatric Neuropsychiatry Program, a multidisciplinary clinic for children with Tourette syndrome, high functioning autism, complex ADHD and genetic disorders for which complex learning and behavioral issues have a neurobiological basis. He has been principal investigator of a study funded by the National Institutes of Health as part of an international consortium to develop a world-wide genetic data bank of individuals with Tourette syndrome.  He served on the AAP Subcommittee on ADHD which revised guidelines for diagnosis and treatment of ADHD, and for many years he has been annually updating ADHD treatment guidelines for the British Medical Journal.

Dr. Brown is a senior clinician in CHOP’s Pediatric Regional Epilepsy Program in which he has been principal investigator on numerous clinical drug trials in pediatric epilepsy. Locally, he served for many years as chairman of the Professional Advisory Board and the executive board of the Epilepsy Foundation of Eastern Pennsylvania.  Dr. Brown currently serves on the advisory committee for the Coordinating Center for Children and Youth with Epilepsy for the AAP with funding by HRSA and the Maternal Child Health Bureau as well as the data safety committee for the National Institute of Health’s Best Pharmaceutical for Children Act.

In addition, Dr. Brown is a senior clinician in the Sleep Disorders Center at CHOP with a major interest in how sleep and its disorders interact in children with neurological and developmental disorders. Dr. Brown was the only sleep physician on a Pennsylvania joint government commission advisory committee which recently published an extensive report on secondary school start times.

Beyond his academic accomplishments, Dr. Brown is devoted to his family, including Dotty, his wife of 51 years, his 3 daughters and their spouses, and 6 grandchildren.

Dr. Brown has always demonstrated extraordinary compassion and dedication to children with complex disorders. Dr. Brown trained generations of child neurologists, many of whom work at CHOP, share his philosophy of care, and will assume the care of his patients during this transition.

“It is an exciting time with daily advances in neurogenetics and the opportunity for a new level of possibilities for previously untreatable disorders,” he said.