The lower extremity specialists in the Limb Preservation and Reconstruction Program team at Children’s Hospital of Philadelphia (CHOP) specialize in managing these complex orthopedic problems, but identifying these patients is a task shared by all clinicians interfacing with children presenting with a lower limb complaint.

Timely recognition of abnormalities in length or alignment is critical to maintaining all available options for correction, as harnessing the power of growth remains possible only while the physes remain open. Clinically, this begins with a standing assessment of alignment with the patellas facing forward, taking into account any varus (bowed legs — seen as space between the knees with the ankles together) or valgus (knock knees — seen as space between the ankles with the knees together). It is imperative to note that normal knee alignment varies with age: infants generally have slight varus, which usually progresses through neutral at age 1.5 to 2 years. This gradually proceeds into valgus, which tends to peak at age 3 to 4, followed by progression back towards neutral and reaching final alignment at around age 7.

It is critical to know what alignment is physiologic, as any malalignment that is severe, asymmetric, associated with red flag findings, or not appropriate for age should be referred to the orthopedic limb deformity team for evaluation.

While many maneuvers have been described to assess leg lengths, we often assess with blocks under the short limb until the pelvis is level. Regardless of exam maneuver of preference, any limb length discrepancy near or greater than 1.5 cm to 2 cm in a growing child should be referred for evaluation. This can be confirmed with imaging prior to referral if the child is an appropriate age.

When an angular deformity or limb length discrepancy is suspected, a standing hip to ankle radiograph (orthoroentgenogram) with the patellas facing forward is the radiographic study of choice. When possible, we use the low-dose EOS standing films available at CHOP and multiple satellites. We generally do not image small limb length differences in children under age 4 to 5 as treatment is unlikely to be indicated until later childhood and image quality is limited until children can stand still. We assess alignment by drawing a line from the center of the femoral head to the center of the ankle, called the mechanical axis line, which should intersect the middle third of the knee joint. If it lands medial to this, the knee is in varus, if it is lateral, it is in valgus. We then assess the joint line angles to find which bone — tibia, femur, or both — is contributing to the malalignment.

You can determine the overall limb length by comparing the distance from the top of the femoral head to the center of the ankle on each side, and then measuring the length of each femoral and tibial segment to see where the length discrepancy is coming from and how large it is.

The goals of limb length discrepancy treatment are a discrepancy of under 2 cm at maturity, a level pelvis, a vertical take off of the lumbar spine, similar knee heights, and a symmetric gait pattern. We also obtain a bone age at the time of X-ray, as long as once the patient is over a chronologic age of about 8 years as bone age is unreliable at younger ages, to help predict the ultimate discrepancy at maturity. If the ultimate discrepancy is predicted to be < 2 cm, generally no intervention is needed. For discrepancies of 2 cm to 5 cm, we often recommend timing physeal closure of the long side so that the limbs will be near even at maturity, although in skeletally mature patients or in those who are opposed to epiphysiodesis, limb lengthening remains an option.

For larger discrepancies, multiple short segment lengthenings, sometimes in concert with a contralateral epiphysiodesis to mitigate final discrepancy, are performed. There is no strict limit to lengthening, but in patients with anticipated discrepancies of > 20 cm or > 40% of the contralateral side, amputation or rotationplasty with prosthetic fitting may give a more functional result with fewer surgical procedures, but this is a shared decision with the patient and family.

With regards to angular deformity, a multitude of corrective options exist depending on bone age and deformity characteristics.

For angular deformities with open growth plates, tension band plating or screw tethering can be used to reversibly tether one part of the physis, allowing the untethered side to “catch up” on growth, slowly correcting the deformity over time (see Figure 1). Since this technique relies on a healthy, open physis, in patients with closed growth plates, unhealthy growth plates, or severe deformity, other options must be chosen. In mild to moderate deformity in 1 or 2 planes, osteotomy with internal plate fixation is often possible (see Figure 2). 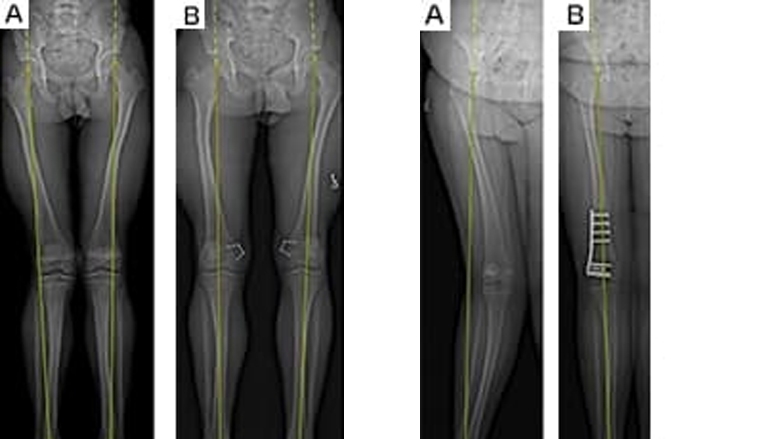 When angular or rotational deformity coexists with a limb length inequality, acute deformity correction with gradual lengthening can be performed with an internal lengthening nail (see Figure 3), or gradual correction of both length and alignment can be done with an external frame. In severe, multiplanar deformities, external frames remain a mainstay of treatment (see Figure 4). 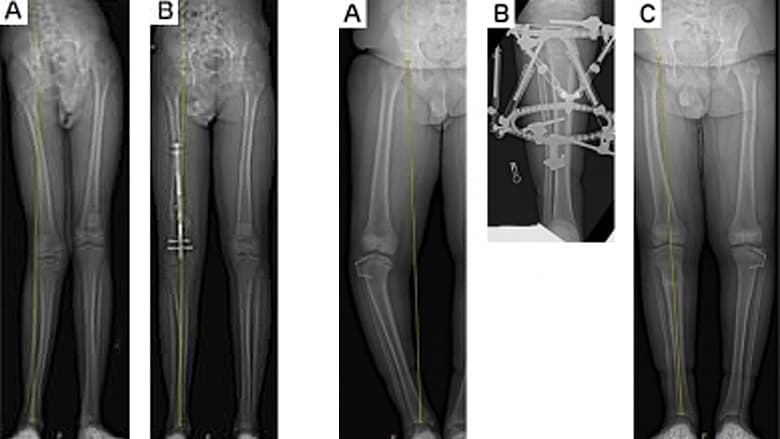 Figure 3 (left): A. Preoperative images of a near skeletally mature patient with right genu valgum, as demonstrated by a mechanical axis intersecting the lateral quadrant of the knee, and limb length discrepancy, right shorter than left, as evidenced by the right femoral head sitting well below that on the left B. Postoperative images after acute correction of angular deformity with a retrograde nail, followed by gradual lengthening, now with a mechanical axis through the center of the knee and more even leg lengths.

Figure 4 (right): A. Preoperative images of a patient with right genu varum, not fully corrected with prior attempt at guided growth B. Postoperative image of the tibia demonstrating osteotomy and placement of frame for gradual correction. C. Postoperative image after frame removal showing the mechanical axis now through the central third of the knee.

Reference and other reading

Conditions Treated by the Limb Program

The Limb Preservation and Reconstruction Program cares for children with a wide variety of conditions that affect their arms and legs.