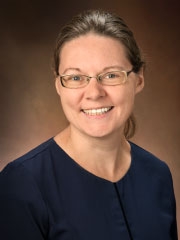 Elizabeth Bhoj, MD, PhD Researchers from Children’s Hospital of Philadelphia (CHOP) have demonstrated that newly mutated variants of a key protein involved in supporting chromosomes result in several issues ranging from developmental delays to epilepsy to congenital abnormalities and may provide researchers with a new target for therapeutic intervention. The findings were published online today by the journal Science Advances.

To determine whether germline mutations of the H3.3 histone had any impact on patients, the study team analyzed 46 patients with 37 different germline mutations who also had neurologic dysfunction and congenital anomalies without malignancies. Using molecular modeling, the researchers identified that all of 37 variants demonstrated clear disruptions in interactions with DNA, other histones, or histone chaperone proteins. The effect that these germline mutations had on patients was clearly distinct from the effect of somatic mutations in the same histones.

“By analyzing these variants, we identified a novel genetic syndrome associated with a variety of neurological impacts, including neurodegeneration,” said Elizabeth Bhoj, MD, PhD, an attending physician with the Division of Human Genetics at CHOP and senior author of the study. “With more work, we may be able to develop targeted therapies for patients affected by these mutations.”