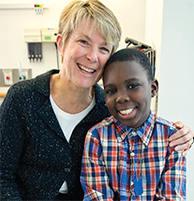 Carlyle Glah, LSW, MSW,who works with patients awaiting kidney transplants and their parents, with kidney transplant patient Samad, 10. Social workers play a pivotal role with Nephrology patients, whether they are experiencing an acute episode or require Maintaining a transplanted organ and keeping the recipient from rejecting it requires ongoing immunosuppression. Ideally, immunosuppression should be as limited and specific as possible. However, while current immunosuppressive regimens are very good at preventing rejection in the first year after transplantation, long-term outcomes remain relatively poor due to long-term graft injury. In addition, patients suffer significant toxicity and become vulnerable to loss of essential immunity protecting the recipient from infections and cancers.

Unfortunately, most immunosuppressive medications are mechanistically too blunt, targeting a broad spectrum of immune cells indiscriminately. With this approach, it is not possible to eliminate specifically the part of the immune response that is undesired (ie, rejection of the allograft) while maintaining protective immunity against infections and cancers.

Through the work of the Hancock laboratory at the Perelman School of Medicine at the University of Pennsylvania, Ulf H. Beier, MD, FAAP, pediatric nephrologist at The Children’s Hospital of Philadelphia, has studied therapeutic targets in a subset of T cells called regulatory T cells (Tregs), which have the physiologic function to restrict and suppress immune responses. Among those drug targets in Tregs, Beier’s work focuses on Sirtuin–1, which is a class III histone/protein deacetylase (HDAC).

As an HDAC, Sirtuin–1 can perform deacetylation reactions on other proteins. Many proteins contain lysine residues, which can be modified by adding or removing an acetyl-group to the lysine residue. Acetylation or deacetylation can change the biochemical properties of proteins — similar to phosphorylation and dephosphorylation — and can act as an on–off switch for enzymes, change the affinity of transcription factors to DNA, or give the protein a cue to move from one cellular compartment to another, to name just a few functions.

With regards to Tregs, Sirtuin–1 decaetylates the transcription factor Foxp3 forkhead box P3), which is central to the function of Tregs. Inhibition of Sirtuin-1 leaves Foxp3 more acetylated, which protects Foxp3 from being recycled and disassembled, increasing its affinity to bind to DNA and execute its transcriptional functions that make regulatory T cells suppress other immune cells. Thus, improving Foxp3 acetylation strengthens Tregs.

At present, pan–HDAC inhibitors are utilized in clinical trials for the treatment of cancers. However, their applicability is limited by drug toxicity. Class I HDACs are expressed ubiquitously, and thus present in every cell of the body, so it is not surprising to see a broad variety of undesired effects. Targeting individual or several select few HDACs by small molecule inhibitors could therefore be of therapeutic interest.

That led Beier to study the molecular mechanisms of how HDAC6, HDAC9, and Sirtuin–1 work in T cells and Tregs, and to test if combinations of isotype–specific HDAC inhibitors have additive beneficial effects on Treg function and more efficient, less toxic immunosuppression.

He found that Sirtuin–1, HDAC6, and HDAC9 all share the mechanism of deacetylating Foxp3. Inhibition of either HDAC increases Foxp3 acetylation, improving its stability (by preventing turnover) and increasing DNA binding and transcriptional activity. In addition, each HDAC individually targets different client proteins, which further stabilize Foxp3 expression.

When combining isotype–specific HDAC inhibitors, he noted that HDAC6 and Sirtuin–1 inhibition produced additive beneficial effects on increased Treg function in vivo, using a homeostatic proliferation assay. In this assay, T cells and Tregs are injected into immunodeficient mice lacking their own T cells and B cells. The injected T effector cells will proliferate in the lymphopenic environment while being suppressed by the Treg injected at the same time. Mice treated with a combination of HDAC6 and Sirtuin–1 inhibitors exhibited most T effector cells suppression — more than either HDAC inhibitor alone. Therefore, combining HDAC6 and Sirtuin–1 targeting maybe a suitable strategy to promote Treg function, achieving better immunosuppression with less toxicity.

Of note, it is possible to control Foxp3+ Treg function in just the opposite way, through essentially the same mechanism. A recent study by the Hancock laboratory found that inhibiting a key antagonist of HDACs — the histone acetyl transferase p300, which acetylates Foxp3 — can weaken Tregs without causing substantial autoimmunity. Weakening Tregs is an important novel therapeutic concept in cancer immunotherapy.