Published on Jun 21, 2016 in Orthopaedics Update

Children and adolescents with significant congenital or acquired limb length differences often require lengthening of the affected short limb. Traditionally, this is done with external fixation which requires placing pins through the skin and into the bone, attaching the pins to bulky external fixation frames which were then be used to lengthen the bone and correct deformity. While very successful, this treatment is associated with significant drawbacks related to the size of the frame, difficulty finding comfortable ways to sleep and wear clothing, soft tissue stiffness and scarring, as well as the high rate of pin infections.

For the past several years, the lower extremity deformity team at The Children’s Hospital of Philadelphia have been using a new internal technique for limb lengthening. This approach, called the PRECICE® nail, uses a magnetically controlled intramedullary lengthening nail to allow for controlled lengthening of long bones without the need for external pins or wires.

The PRECICE nail is inserted into the intramedullary canal of bones, similar to the techniques used to treat long bone fractures. Through a small incision the bone is then divided. After an appropriate waiting period (usually seven to 10 days) an external motorized magnetic remote-control device is placed on the limb for about three to four minutes, four times a day. This allows for controlled lengthening of the rod and bone. The limb is usually lengthened by ¼ mm, four to eight times a day. 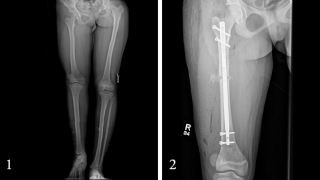 FF is a 13-year-old female born with a congenitally short right femur and tibia. After discussing all the available limb equalization options, she and her family opted for staged lower extremity lengthening of the femur and then the tibia with PRECICE intramedullary nails.

The PRECICE nail represents a significant advancement in our ability to treat limb length discrepancy. Although children treated with this technique are still at risk for the drawbacks and complications commonly associated with leg lengthening — such as nerve injury, contractures, and delayed healing of the bones — this approach provides an easier, less painful, and less cumbersome technique for dealing with these difficult conditions. 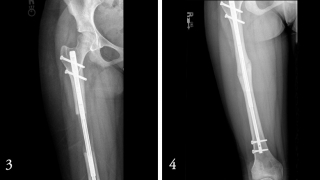 The Limb Preservation and Reconstruction Program at Children’s Hospital of Philadelphia has a large volume of experience with this device and surgical technique and is enthusiastic about the promise it holds for the treatment of pediatric patients with limb length discrepancies and deformities.

Contributed by: B. David Horn, MD