A multi-institutional study from the Developmental-Behavioral Pediatrics Research Network (DBPNet), led by CHOP, analyzed the effectiveness and side effects of 2 main classes of ADHD medication prescribed to preschool- age children, stimulants like methylphenidate and alpha 2-adrenergic agonists, such as guanfacine.

The research, published in JAMA, found that the percentage of children whose ADHD symptoms improved was slightly greater in the children who were treated with stimulants (78%) compared to alpha 2-adrenergic agonists (66%). But stimulants also had higher rates of side effects like moodiness/irritability (50% vs. 29%), appetite suppression (38% vs. 7%), and difficulty sleeping (21% vs. 11%). The only side effect that was more common in children taking alpha 2-adrenergic agonists was daytime sleepiness (38% vs. 3% for stimulants).

“Our study suggests that it would be reasonable for clinicians to consider using alpha-adrenergic agonists for younger preschool age children with ADHD as stimulants have high rates of side effects such as moodiness/ irritability, sleep problems, and decreased appetite,” says senior author Nathan Blum, MD, Chief, Division of Developmental and Behavioral Pediatrics at CHOP.

Researchers from CHOP, led by senior author Benjamin Yerys, PhD, have found that children on the autism spectrum who struggle with executive functioning skills can face challenges at school that are different from the ones they face at home. Additionally, adolescence is a time when executive functioning challenges can worsen, suggesting the need for more intervention supports.

The findings were published in the journal Autism.

When children and adolescents go into cardiac arrest outside of a hospital setting, CPR with rescue breathing—rather than CPR using only chest compressions—leads to better outcomes, according to a new study by researchers at CHOP. The findings, published in the Journal of the American College of Cardiology, support the use of bystander CPR with rescue breathing in children experiencing cardiac arrest vs. compression-only CPR, which is most frequently taught to laypeople.

“For infants in particular, our study shows that CPR with rescue breathing is the only type of CPR that is associated with good neurological outcomes; infants who received compression-only CPR had similar outcomes to infants who did not receive bystander CPR,” says CHOP’s Maryam Y. Naim, MD, MSCE, first author.

Researchers at CHOP, led by Cynthia Mollen, MD, MSCE, recently published a study in Child Abuse and Neglect exploring the healthcare experiences of youth victims of sex trafficking. Youth disclosed that their traffickers prevented them from receiving medical care, that healthcare providers rarely asked about trafficking or separated them from the adult accompanying them, and that the demeanor of healthcare providers influenced their willingness to disclose abuse.

The findings of youth-centered research such as this have informed the development of a new interdisciplinary clinic at CHOP for victims of commercial sexual exploitation, the Adolescent Protection Collaborative. This clinic is a novel partnership between Primary Care, Adolescent Medicine, and SafePlace: Center for Child Protection and Health, and is funded by the Oscar & Elsa Mayer Foundation.

Exposure to neighborhood gun violence is associated with increased odds of mental health-related pediatric emergency department visits among children living near a shooting, according to a CHOP study published in JAMA Pediatrics.

Aditi Vasan, MD, led an analysis of 128 683 emergency department encounters (2014 through 2018) for children aged 0 to 19 years living in 12 ZIP codes in Philadelphia. Researchers found that a total of 2 629 people were shot in the study area in the timeframe studied, and 54 341 children living nearby had 1 or more emergency department visits within 60 days of a shooting. Children residing within 2 to 3 blocks (1/8 of a mile) of a shooting and children exposed to multiple shootings had greater odds of mental health-related emergency department presentations. 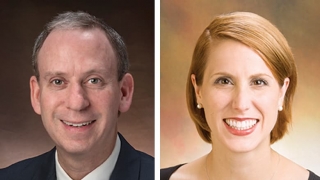 The Division of Oncology appointed Sarah Tasian, MD, as Chief of the Section of Hematologic Malignancies. Tasian succeeds Richard Aplenc, MD, PhD, MSCE, who had filled this role for 13 years.