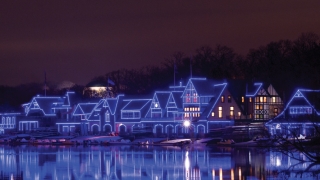 As dusk fell on a cold mid-December day, the first notes of “Winter Wonderland” came lilting across the plaza of CHOP’s Raymond G. Perelman Campus, across from the Main Building. The much-loved carol was the first of several performed that evening by the CHOP Choir — 40-some singers strong, accompanied by guitars and an accordion. A crowd of 200, holding electric candles and wearing necklaces that glowed in CHOP’s signature blue color, joined in the melodies. All were gathered to celebrate the Season of Light, a community-wide fundraiser and show of support for the children at CHOP.

President and CEO Madeline Bell greeted the well-wishers and introduced the Butkus family, whose youngest member, 2-year-old Jaxson, had been diagnosed with a brain tumor more than a year ago. After undergoing complex brain surgery, he received 30 days of proton radiation, then endured months of chemotherapy. But this day had been a momentous one for Jaxson. “Today he began his 12th and last round of maintenance chemotherapy,” his mother, Diana, told the crowd. “Next Tuesday his chemo will be complete — just in time for Christmas.”

Then Jaxson, smiling in his father’s arms, leaned toward the podium and pushed a big button — and at that moment, the surrounding buildings, as well as more than 25 landmarks across Philadelphia, including the Ben Franklin Bridge, the Cira Centre, Lincoln Financial Field and Boathouse Row, lit up in CHOP blue.

By year’s end, Season of Light inspired more than 1,600 supporters to send messages of compassion to CHOP patients, and the campaign raised more than $1 million. “Season of Light is a citywide celebration of all the work we do,” Bell said at the event, “but, more importantly, it’s for the children who are here over the holidays.” Jaxson was once among that group, but after a tough year he’s now home and serving as an inspiration to others.