When Jaxson was first diagnosed with a rare form of genetic epilepsy, his mother, Kristen, was terrified. Her fears were eased when she discovered CHOP’s world-renowned Epilepsy Neurogenetics Initiative (ENGIN). Driving two to three hours each way to access ENGIN’s expert team has always been worth the trip. Telemedicine brings that expertise right to her home.

Jaxson, 3, has been a patient of the Epilepsy Neurogenetics Initiative (ENGIN) at Children’s Hospital of Philadelphia (CHOP) since he was 7 months old. He was scheduled for a follow-up visit with the ENGIN team when the COVID-19 pandemic upended life as we know it. Fortunately, when CHOP postponed all elective and nonurgent outpatient neurology visits due to social distancing measures adopted in the region, the ENGIN program quickly mobilized to convert outpatient care from in-person to telemedicine visits.

The ability to check in with the ENGIN team in real time from the comfort of their home allowed Jaxson and his mom, Kristen, to avoid unnecessary exposure to COVID and the stress of travel, while still being able to access ENGIN’s expertise, which has been instrumental in improving Jaxson’s life. 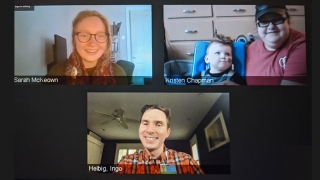 When Ingo Helbig, MD, and Sarah McKeown, MS, LCGC, members of the ENGIN team who specialize in Jaxson’s disorder, met him via video visit, he had just recovered from a severe illness and a prolonged stay at the hospital near his home in northeastern Pennsylvania. The ENGIN team was excited to see how Jaxson had recovered and how he was able to interact with his environment and family members at home. When caring for children with multiple disabilities, such as Jaxson, assessing patients within their home can give providers unforeseen insight into their patients.

Search for a diagnosis reveals STXBP1-encephalopathy

Symptoms of Jaxson’s condition began to reveal themselves a few days after his birth. Doctors at the hospital where Jaxson was born struggled to identify what was causing the unusual spasms he was having. At first, they thought it was a reaction to formula, then they suspected acid reflux. Jaxson was discharged home with an acid reflux medication, but the episodes grew progressively worse. After multiple visits to the pediatrician and urgent care, Jaxson was finally referred to a neurologist at a hospital near his home.

An electroencephalogram (EEG) found Jaxson had a seizure disorder known as infantile spasms. He was prescribed a steroid which stopped the epileptic spasms for a month, but then he began to experience different, more intense seizures known as partial focal seizures.

“It was terrifying,” says Kristen. “I had to be calm during them and talk to him and let him know I was there, but it broke my heart.”

The STXBP1 gene was discovered in 2008. Since then, knowledge about STXBP1-related disorders has expanded greatly, thanks in large part to research done by Dr. Helbig and the team at CHOP’s Epilepsy Neurogenetics Initiative (ENGIN), including Sarah McKeown, who joined the ENGIN team last year as a genetic counselor specialized in STXBP1-related disorders. ENGIN is one of the largest centers worldwide to provide care for children with STXBP1-related disorders. Families come to the ENGIN Clinic from all over the world to access the team’s expertise in identifying the underlying cause of a child’s epilepsy and developing an individualized approach to treatment and management.

Mutations in the STXBP1 gene cause a spectrum of neurodevelopmental disorders that can include early-onset epilepsy and developmental delay.

As Kristen quickly learned, many physicians are unfamiliar with STXBP1-related disorders. In turning to the internet for information on the condition, she found a Facebook support group for parents from all over the world. The support group was where she learned about Dr. Helbig.

“The members of the group said he was one of the lead researchers on this genetic mutation,” says Kristen. “It was such a great resource for us, and doable travel.”

Kristen messaged Dr. Helbig about Jaxson’s case. From their first appointment at CHOP, she was blown away by the breadth of the ENGIN team and the depth of their knowledge on the condition. 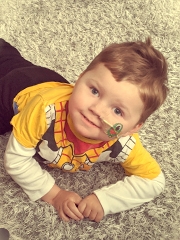 “CHOP is amazing,” says Kristen. “They have incredible resources. Everything is just all incorporated. Because they understand Jaxson’s gene mutation, they can focus on treating the overall disorder. ENGIN helps kids like Jaxson be their very best.”

Like many ENGIN patients, Jaxson has mobility issues that make traveling difficult. He receives ongoing neurology care near his home and has appointments with the ENGIN team twice a year. Dr. Helbig, Sarah and the rest of the ENGIN team evaluate Jaxson’s function and work with his local neurologist to guide care, making recommendations on everything from medication, diet, physical and occupational therapy, and early intervention.

As a result, Jaxson, now 3, has been seizure-free for more than a year. He’s more alert, is babbling more, and is working harder at hitting developmental milestones like sitting up, crawling, rolling over and using his hands to play.

While CHOP has reintroduced in-person outpatient visits, the ENGIN team plans to continue using telemedicine as a component of future patient care for most patients.

“There are parents all over the country and the world that would love to have access to Dr. Helbig and his team,” adds Kristen. “With telemedicine, they’ll be able to see so many more kids. It’s going to open a whole new door.”

“Access to care is a major issue for many families whose children have rare genetic conditions,” says Dr. Helbig. “Telemedicine really gives us the ability to reach out to children with rare conditions where we have expertise and deliver medical care in a way we weren’t able to before.” 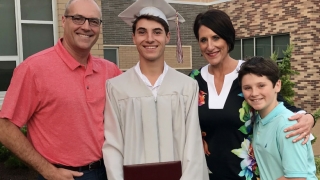 AJ’s life was relatively uncomplicated until age 14, when he began to experience unpredictable seizures and received a life-changing diagnosis of epilepsy. Thanks to the combination of a small, battery-powered device surgically implanted into his brain and an oral medication, he is now seizure-free.