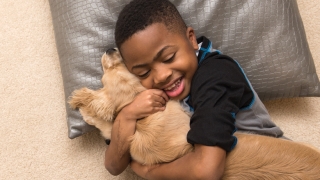 A new start, thanks to a donated body part: That’s the astonishing experience that transplant patients undergo. At Children’s Hospital of Philadelphia, the Pediatric Transplant Center encompasses divisions for four solid organs — heart, lung, liver and kidney — plus the up-and-coming field of pediatric hand transplant.

“Each program has unique aspects,” says Samuel Goldfarb, MD, Medical Director of the Transplant Center. The kidney and liver programs, for example, in partnership with the Hospital of the University of Pennsylvania, off er the option of living donation to help patients get transplanted faster.

The cardiac team uses innovative technologies such as ventricular assist devices, remarkable small machines that take on much of the work of a patient’s damaged heart, as well as total artificial hearts. These technologies have been transformational for patients who otherwise would not have survived the waiting period for a donor organ.

The promise of transplantation continues to grow, yet CHOP researchers still have much work ahead. Unlocking the keys to the immune system to better understand the body’s acceptance — or rejection — of a new organ is a major focus of study.

CHOP’s Pediatric Transplant Center performs between 50 and 60 transplants a year. “Ours is one of the few centers that cares for children of all ages, from infants to young adults,” Goldfarb notes. Read on to meet three of its patients.

Eating lunch, playing video games, attending school — when Zion performed these everyday tasks of childhood, observers marveled. But Zion didn’t consider himself extraordinary. He was just a boy without hands.

Zion was 2 when he developed sepsis, a life-threatening infection that attacked his entire body and eventually required amputation of both hands and his legs below the knee. The infection also damaged Zion’s kidneys, and two years later he underwent a kidney transplant.

At age 8, something truly extraordinary happened: He received a bilateral hand transplant at Children’s Hospital of Philadelphia, the first child ever to undergo the operation.

Although Zion had become a pro at life without hands, his mother, Pattie Ray, had decided to get him fitted for prosthetic hands. She brought him to Shriners Hospitals for Children– Philadelphia, where Scott Kozin, MD, a surgeon and Chief of Staff there, felt that Zion’s can-do attitude and the fact that he was already taking immunosuppressants for his transplanted kidney made him a perfect candidate for a hand transplant.

Kozin connected Zion to L. Scott Levin, MD, Director of the Hand Transplantation Program at CHOP and Chair of the Department of Orthopaedic Surgery and professor of Surgery (Plastic Surgery) at Penn Medicine, who concurred. Preparations began for the complicated procedure.

Surgery lasted more than 10 hours and involved 40 people, 10 of whom were attending surgeons. The hands and forearms were attached by connecting bones, blood vessels, nerves, muscles, tendons and, finally, skin. The verdict: an amazing success.

Intense physical and occupational therapy followed, first as an inpatient at CHOP and later at Kennedy Krieger Institute, near Zion’s home in Baltimore. Now, a year and a half later, he is able to swing a bat and throw a football. He even threw out the first pitch at a Baltimore Orioles game. Zion can take medicine and get dressed by himself. He can use his new fingers to pick up objects: a pencil, a fork, a piece of pizza.

“I believe he could have done anything without hands,” says his mother. “But now his light will shine even brighter. I know those hands are going to be used in great ways.”

Born at 32 weeks, Tzivya had kidneys that never functioned normally. Her mother, Chana Davidowitch, says that knowing dialysis might be needed, they came to Children’s Hospital of Philadelphia, where doctors informed them that Tzivya would need a transplant at some point in the future.

As a premature baby, Tzivya needed a feeding tube. Three months after it was removed, she wasn’t getting enough nutrition and the tube was reinserted. “She just didn’t enjoy food,” Chana says of her now 8-year-old daughter. “And she was always tired.”

Tzivya never went on dialysis, but when she was 5, her kidney function decreased and her growth essentially stopped. Her nephrologist believed Tzivya would need a transplant within one to two years, and family members began getting tested to find a match. Chana was deemed the best candidate to donate a kidney, and in August 2015, Peter Abt, MD, performed the transplant surgery.

Once home, the first thing Chana noticed was a change in Tzivya’s energy level. “She went from always falling asleep to never sitting still!” says Chana. “And her appetite improved tremendously.” An avid reader, Tzivya could indulge her passion with vigor. “Last summer I was taking her to the library two times a week,” reports Chana. “Sometimes she’d read 30 books a week.”

The family knows that a kidney transplant doesn’t last forever. “She will probably need another down the road,” Chana explains. “It isn’t a cure, but Tzivya’s quality of life is so much better.”

Ask 12-year-old Sofia what she can now do after receiving a double lung transplant, and she quickly blurts out, “Walk, run and scream!”

When Sofia turned 8, she began struggling to gain weight. Her mother, Elsy Cartagena, had a handy comparison: Sofia’s twin sister, Stefani, whose growth was progressing normally.

Doctors treated Sofia for asthma and tested for cystic fibrosis; the eventual diagnosis was interstitial lung disease, which causes tissue deep in the lungs to become thick and stiff. As the scar tissue increases, the lungs can’t properly move oxygen into the bloodstream.

Then more devastating news followed: Stefani also had the disease. The cause is unclear; there could be a genetic origin or a mutation not inherited from their parents, explains Samuel Goldfarb, MD, Medical Director of the Transplant Center and the twins’ Pulmonary Medicine Attending Physician. (Tests of their brother came back negative.) Whatever the cause, the disease’s effects were clear: Sofia and Stefani began to have difficulty functioning without supplemental oxygen.

With regular doctor appointments, consultations for medication adjustments and Emergency Department visits that led to inpatient stays, Sofia jokes that in the past few years, they’ve been to CHOP “24 billion times.” Her illness progressed much quicker than Stefani’s, and she was placed on the national transplant list in 2014.

On Easter Sunday 2016, the family was notified of a donor; surgery happened that day. Before the procedure, Stefani got on FaceTime with Sofia’s surgeon, Stephanie Fuller, MD, who remembers the exchange with a laugh: “She said to me, ‘You better take good care of my sister!’ I had my marching orders, for sure.”

Fuller notes that because of the types of diseases that affect children as opposed to adults, “pediatric lung transplants are unique in that they’re almost always bilateral.” She adds, “Recovery takes a lot of work — and Sofia was a star.” Three days after the surgery, physical therapists had Sofia on a treadmill. “They started super slow,” Sofia recalls, “and then went faster and faster.” She was walking at a pace she hadn’t for years. Stefani, now on the donor list, waits until she can become a twin to Sofia in health.