August 5, 2014 — The Children’s Hospital of Philadelphia (CHOP) today announced that it will develop a nonprofit milk bank to provide donor human milk for hospitalized infants at the Hospital’s Main Campus, with the goal of opening in late summer of 2015.

CHOP will develop the bank in cooperation with the Human Milk Banking Association of North America (HMBANA), a professional organization that sets the standards and guidelines for nonprofit donor milk banking in North America. Once open, it will be one of the only nonprofit milk banks located inside a freestanding children’s hospital in the United States. 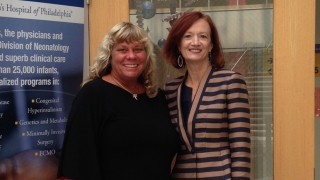 The Hospital has used donor human milk since 2006 for at-risk infants to supplement a mother’s own milk supply if it is insufficient or if the mother is unable to provide milk for her infant. This milk is ordered from a HMBANA-certified milk bank, where it is processed and pasteurized in accordance with stringent safety guidelines, and then shipped to CHOP. There are 17 HMBANA milk banks throughout the U.S. and Canada, with the closest banks located in Ohio and Massachusetts.

At CHOP, many mothers choose to become human milk donors and CHOP facilitates the donation process in partnership with a HMBANA milk bank. In order to become a HMBANA donor, the mother must meet strict donor criteria to ensure that she is healthy and the milk is safe. Donors must complete a medical history and lifestyle questionnaire and obtain the approval of their healthcare provider prior to donating milk, as well as have a blood test to screen for diseases including HIV, hepatitis B and syphilis.

HMBANA-approved donors are volunteers and are not compensated. These same guidelines will be followed in the future; however, the process will be completed at CHOP and the donated milk will be pasteurized and processed for CHOP’s inpatient infant population.

“By developing an onsite milk bank, we will no longer have to ship out milk donated by our families and wait for it to be pasteurized and processed elsewhere,” said Diane L. Spatz, PhD, RN -BC, FAAN, director of lactation at CHOP. “By doing all of this work onsite we will streamline what is now a lengthy process and make it even easier for our families and employees to donate milk.”

The importance of human milk

“At CHOP, human milk is not viewed as food — but as a medical intervention,” said Spatz. “The immunological and anti-inflammatory properties of human milk are especially important for the critically ill infants treated in our Newborn/Infant Intensive Care Unit (N/IICU) and other intensive care units.”

In addition to strengthening an infant’s immune system to help fight disease and infection, human milk also contains growth hormones to help babies grow and is easier to digest than formula.

CHOP has a robust breastfeeding and lactation program led by Spatz, an internationally known lactation expert. The Hospital’s team of lactation researchers and consultants is supplemented by more than 600 specially trained breastfeeding resource nurses who provide support to breastfeeding mothers and families. CHOP has a state-of-the art Human Milk Management Center, staffed by trained technicians seven days a week, who work with nutrition, nursing and lactation specialists to develop a plan of care for infants with special needs.

The Center provides a variety of services to mothers and families of hospitalized infants, including human milk management and storage, provision of human skim milk, fractionation of human milk, human milk analysis and donor human milk.

The Children’s Hospital of Philadelphia was founded in 1855 as the nation’s first pediatric hospital. Through its long-standing commitment to providing exceptional patient care, training new generations of pediatric healthcare professionals and pioneering major research initiatives, Children’s Hospital has fostered many discoveries that have benefited children worldwide.

CHOP's pediatric research program receives the highest amount of National Institutes of Health funding among all U.S. children’s hospitals. In addition, its unique family-centered care and public service programs have brought the 535-bed hospital recognition as a leading advocate for children and adolescents.

HMBANA is the professional organization representing nonprofit donor human milk banks in North America and is comprised of a multidisciplinary group of healthcare providers that promotes, protects, and supports donor milk banking. HMBANA sets the standards and guidelines for donor milk banking and certifies milk banks. It was founded in 1985 and currently has 17 member banks throughout the U.S. and Canada. For information, visit: www.hmbana.org.