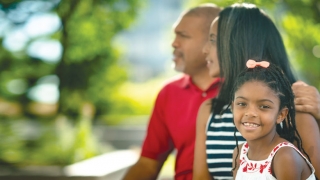 When few are affected, it can seem that few care — but not at Children’s Hospital of Philadelphia. CHOP harnesses the intellectual power of its many researchers and clinicians in order to fully understand and develop new treatments for rare diseases. The hospital also builds robust programs that gather a wealth of information about specific rare diseases and give clinicians extensive experience with patients. Generous donor support is essential for all of this to happen.

Discover the extraordinary journeys of three families affected by very different rare diseases — and learn why their stories offer hope to all families struggling to find answers.

Elijah’s condition was a mystery: After years of painful symptoms and examinations by dozens of specialists at four hospitals, no one could say what was wrong with him.

When Elijah was 5 months old, his belly became “super extended,” says his mom, Noami Patino. Tests revealed that his spleen was about three times larger than normal. For two years he was on medication to suppress his immune system and lessen the inflammation. Then, during a family vacation, he took a turn for the worse. He got a fever every day, and his skin had a yellow hue. It turned out he had developed major infections in his lungs and liver. The Patinos decided to come to CHOP.

CHOP specialists ordered a new type of test — whole exome sequencing, which catalogs a person’s protein-coding genes. After months of analysis, doctors identified an extra copy of a gene called CD40LG that was causing Elijah’s white blood cells to attack his own organs. This was the first known case of this gene being duplicated.

With this information in hand, immunologist Neil Romberg, MD, called the Patinos.

“I’ll never forget that call,” says Elijah’s dad, Rich. “It was a voicemail saying, ‘My name is Neil Romberg, and I’m a doctor at CHOP. I came across Elijah’s file, and I think I can help.’”

Tests of other family members revealed that Noami shared the same genetic mutation, but her symptoms were much different: just periodic joint pain and sluggish blood flow to her fingertips. This autoimmune disease acts differently in females and males because women’s two X chromosomes silence the extra CD40LG. Noami’s genetic doubling was likely accidental, then Elijah inherited it from her. As of now, Elijah and Noami are the only two people in the world diagnosed with the disease.

Romberg and the team set out to find a customized treatment for Elijah. They thought a potent immunosuppressant medication used to prevent organ rejection after transplant could be the key. After CHOP researchers tested the medication on Elijah’s cells in a lab, he began taking the customized therapy. “Within a week or two, we started noticing a difference,” Noami says

Now 7, Elijah is an active second grader whose story recently received national attention on Megyn Kelly TODAY. “Words can’t capture what it means to see Elijah doing so well,” Rich says. “To have a hospital like CHOP go above and beyond for one child — our child — is so special.”

The group of rare disorders known as leukodystrophies strike in a particularly heartbreaking way — as Calliope Joy’s parents, Maria Kefalas and Patrick Carr, can attest. Cal, as she goes by, seemed perfectly healthy until around age 2, when her form of leukodystrophy began its process of destroying the white matter that protects the nerve fibers in her brain. The result: An active little girl progressively lost the ability to walk, speak and swallow. Now 8, Cal is bedridden and needs a full-time nurse.

“When you get a diagnosis like this, you look it up on the web, and what you find is frightening,” says Maria. She and her husband felt helpless — and also very isolated. The disease affects only about 1 in 7,400 births. Maria knows one family that went 20 years without ever meeting anyone else dealing with the disease.

Maria and Patrick decided to take action. They began fundraising with determination, naming their nonprofit the Calliope Joy Foundation and raising $450,000, which helped establish the Leukodystrophy Center of Excellence at CHOP in 2015.

“We are fighting the idea that there is nothing to be done,” says Maria, “and CHOP has shown incredible leadership in changing that.”

She has witnessed the leukodystrophy team at CHOP grow from three to nearly three dozen specialists, who draw pediatric patients from across the country. She has seen CHOP invest its own resources into the program, which in turn inspires more fundraising dedication, including support from the Auto Dealers Association.

And, importantly, the Kefalas-Carrs and other families that have raised money for the center have also been instrumental in creating a community so that no one feels alone and confused after a diagnosis. Although these diseases are not currently curable, the symptoms are treatable. At CHOP, a comprehensive clinical care team covers everything from neurology to nutrition to metabolism. And while the Leukodystrophy Center continues to refine care plans, researchers in CHOP labs are making advances in gene therapies and conducting clinical trials, with their eyes focused on a cure.

A rare type of rare

When a major pediatric hospital near their Maryland home struggled first to diagnose their daughter Paige with congenital hyperinsulinism (HI) and then to successfully treat her, Maleka and Kevin Brown were frantic for answers.

HI is a rare condition in which overactive beta cells in the pancreas secrete so much insulin that a child’s blood sugar drops to dangerous, sometimes life-threateningly low levels.

The initial treatment plan did not control Paige’s low blood sugars. Internet searches kept turning up CHOP and Charles Stanley, MD, founder of CHOP’s Congenital Hyperinsulinism Center. “I called, and after talking with him, our gut told us the best thing was to bring her to CHOP,” Kevin says.

Paige’s case differed from typical babies with HI, who usually have low blood sugar within a couple days of birth. She didn’t show signs until she was 4 months old.

Stanley suspected Paige had focal HI disease, where the out-of-control beta cells are concentrated in one spot, as opposed to diffuse disease, in which the beta cells are scattered throughout the pancreas. The team felt surgery was Paige’s best option.

Once in the operating room, Surgeon-in-Chief N. Scott Adzick, MD, MMM, who has operated on more than 500 patients with HI, saw an area of Paige’s pancreas that “just didn’t look right,” Kevin recalls. “He told us he carefully removed the abnormal tissue until only normal-looking tissue was left.”

Post-surgery, Paige passed a fasting blood sugar test, showing she was cured. Still, Stanley continued to investigate and later determined she had an uncommon type of HI called LINE. It is sort of a hybrid of focal and diffuse types. While any type of HI is rare — with one case in about 50,000 births — LINE-type occurs in about 1 in 500,000 births.

“Nowhere else in the world do the endocrinologists, nurses and surgeons know as much about HI as they do at CHOP,” Maleka says. “We had the best outcome we could have hoped for.”