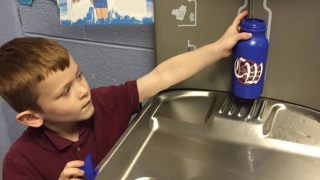 The more clean, fresh, cool water kids drink, the fewer sugar-sweetened beverages they’re likely to consume and less likely they are to get kidney stones. Those are two positive health outcomes that Greg Tasian, MD, MSc, MSCE, a urologist at Children’s Hospital of Philadelphia (CHOP), wanted to promote in Philadelphia’s school children.

“Greg’s research was a key catalyst to pull a bunch of organizations together to get this done,” says Mica Root, senior projects coordinator for Get Healthy Philly. “It gave us the energy and momentum we needed around increasing access to and appeal of hydration stations in the schools.” 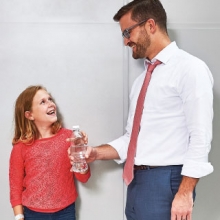 Greg Tasian, MD, promotes drinking water with kidney stone patient Farrah, 10. Tasian cited research that showed the chance of a child getting a kidney stone has more than doubled over the last 20 years. Drinking a lot of water dilutes a person’s urine, making it harder for the naturally occurring minerals to stick together to form a stone. But many schools had old-fashioned drinking fountains that either didn’t work or didn’t look inviting.

Whatever the reason, the kids avoided them, relying instead on soda, juice or purchased bottles of water for daytime sipping — a difficult and costly situation in a city where 38 percent of children live in poverty.

Tasian and Root targeted six schools in need and applied for a CHOP Cares Community Grant to help fund the purchase and installation of hydration stations.

In the meantime, the coalition — with some advocacy from City Council — raised awareness of the issue, which convinced School Superintendent William Hite to commit to putting three new hydration stations in every Philadelphia school.

“So instead of buying hydration stations with the grant, schools used the money on supplies for posters to encourage kids to drink water and for mats in front of the stations to prevent slipping on spilled water,” Root says.

Unlike Tasian’s research, which includes studies that scientifically track how to prevent kidney stones, this project didn’t have a research component. “We knew from general information that kids weren’t drinking enough water,” he says. “I might have been able to get the ball rolling on getting hydration stations installed, but it was a total team effort. In the end, the kids benefit, and that’s what it’s all about.” 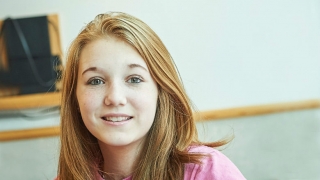 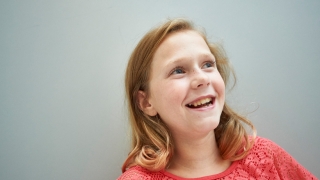