Always active, 20-year-old New Jersey resident, Lily Conway, thought little of the dull pain that would creep into her right knee cap. Figuring it was only a pulled muscle, she would continue to power through her gym routine and play practice. As months went on she noticed a knot, which began to cause her increased pain. A trip to her local pediatrician confirmed that the now tennis ball-sized mass on her leg was a tumor. She was immediately referred to Alexandre Arkader, MD, an attending surgeon in the Division of Orthopaedics and Division of Oncology at Children's Hospital of Philadelphia (CHOP), and was conveniently seen at the CHOP Specialty Care Center at Virtua in Voorhees, NJ, near her home.

Dr. Arkader confirmed that it was a benign, but a very aggressive, giant cell tumor that would need to be surgically removed. In May, Dr. Arkader performed an almost five-hour surgery to remove the mass while protecting surrounding nerves and removing her fibula from around her knee.

Lily proved resilient. Although her family was warned that she may not be able to move her foot immediately following surgery, she woke up moving not only her foot but her leg too.

Lily is featured in South Jersey Magazine’s, “Tales of Triumph” issue which details her biggest breakthrough yet. 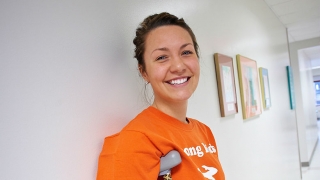