In a phase 2a study, CHOP researchers showed exendin-(9-39) leads to blood sugar control in children with HI, which could improve care for a rare condition with few treatments 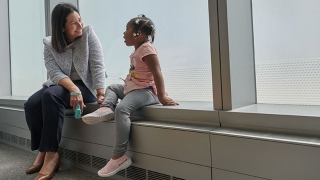 Researchers at Children’s Hospital of Philadelphia (CHOP) have shown that a targeted treatment they developed is effective at controlling blood sugar in patients with hyperinsulinism (HI), a genetic disease in which the pancreas produces too much insulin. The findings, which were published today in Diabetes Care, provide further evidence that the treatment could prevent hypoglycemia in patients with HI and may preclude the need for a full removal of their pancreas, a current standard treatment for severe diffuse HI.

“There are currently very few medical treatments for HI, and those treatments are of limited effectiveness while also associated with significant side effects,” said senior study author Diva D. De León-Crutchlow, MD, Chief of the Division of Endocrinology and Diabetes and Director of the Congenital Hyperinsulinism Center at Children’s Hospital of Philadelphia. “We are very excited about this study because by targeting the underlying pathophysiology, exendin-(9-39) offers potential therapeutic advantages over currently available therapies for HI, which could make a huge difference in the lives of the children we care for.”

Congenital HI is the most common cause of persistent hypoglycemia in infants and children. Although about half of cases have no known genetic cause, the most common and severe form of HI is caused by a mutation in genes that encode the two subunits of the beta-cell ATP-sensitive potassium channel, a form of the disease known as KATPHI. Patients with this form of the disease become hypoglycemic when fasting and also after a protein-rich meal, likely due to the glutamine in the protein stimulating the amplification of glucagon-like peptide-1 (GLP-1) receptor signaling on the beta-cell.

In prior studies, CHOP researchers have shown that administering exendin-(9-39), which blocks the GLP-1 receptor, through an intravenous infusion significantly increased fasting glucose levels in adolescents and adults with the KATPHI form of the disease. They also showed that the agent inhibits insulin secretion in models of KATPHI disease. Together, the results suggested that inhibiting GLP-1 signaling could be an effective means of controlling HI.

Given the success of prior studies, the researchers decided to test exendin-(9-39) in younger children with HI to see if the drug would have similar success in that population, not only during fasting but also after a meal. They enrolled 16 patients between the ages of 10 months and 15 years with persistent hypoglycemia due to HI, all but one of whom had genetically confirmed KATPHI; the one patient without genetic confirmation had symptoms consistent with KATPHI.

To test the effectiveness of the treatment, the researchers conducted a six-hour infusion of three different doses of exendin-(9-39) after patients had been fasting for approximately 12 hours and compared those effects with that of a control saline solution. Over the period of another two days, the researchers infused a subset of eight patients with either the highest dose of exendin-(9-39) or a saline control solution during a mixed meal tolerance test and an oral protein tolerance test.

The researchers found that exendin-(9-39) resulted in a 76% reduction in likelihood of fasting hypoglycemia in the mid-dose group and by 84% in the group receiving the highest dose. They found administering exendin-(9-39) during the protein challenge resulted in an 82% reduction in the likelihood of hypoglycemia. The mid-dose group also demonstrated a 20% increase in fasting glucose, while the higher dose resulted in a 28% increase in glucose after a meal and a 30% increase in glucose after a protein challenge. Of note, while the effect of exendin-(9-39) on fasting glucose seems to be mediated by suppression of insulin secretion, the effect on protein-induced hypoglycemia may be mediated by exendin-(9-39)-mediated increase on glucagon, suggesting the treatment might induce multiple mechanisms of blood sugar control.

“This study is further evidence supporting the use of exendin-(9-39), which has been granted breakthrough therapy designation for the treatment of HI, and we look forward to moving this therapy into a phase 3 trial,” Dr. De León-Crutchlow said.
This study was funded by grant 1R01FD004095-01A1 and by The Clifford and Katherine Goldsmith Foundation. The project described was supported by grant number UL1RR024134 from the National Center for Research Resources.